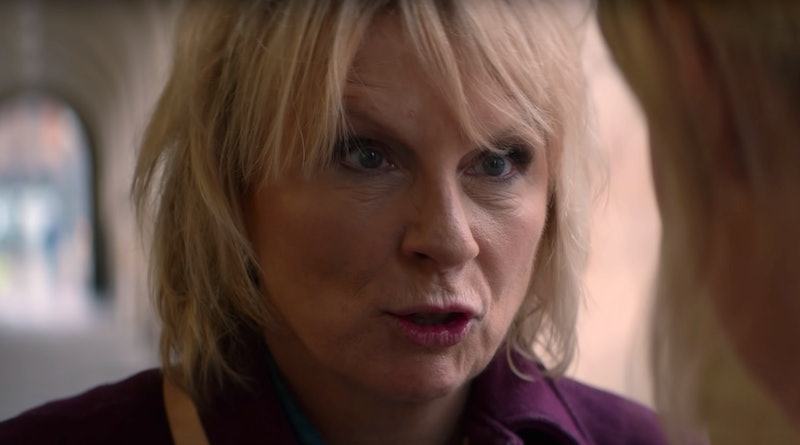 On Jan. 30, Netflix is bringing out a British-led series for mystery lovers to sink their teeth into. The Stranger is a brand new adaptation based on Harlan Coben’s 2015 novel and, in a fittingly strange turn of events, Jennifer Saunders stars in the psychological thriller as Heidi, a close friend to the series' lead. Better known for her hilarious caricatures in French & Saunders as well the iconic Edina in Absolutely Fabulous, this will be the first time we see Saunders embed herself in such a dark storyline, and I for one can't wait.

There'll be no “Eddy, darling”s here as Heidi becomes entangled in the mystery and danger of this heart-stopping series. The Stranger follows the story of Adam Price (played by Richard Armitage) after he is confronted by an unknown woman (Hannah John-Kamen) who tells him a secret that threatens to rip his whole life apart.

“The Stranger was one of my most challenging novels — and definitely the most twisted,” Coben said (via Radio Times). “When I wrote it, I never imagined I’d be part of a ‘Dream Team’ of extraordinary talent bringing it to life. I can’t wait to reunite with Danny, Nicola, and Netflix on this remarkable project.”

“I’m delighted to be playing Heidi in this new Harlan Coben drama,” Saunders has said (via Metro). “There is a great cast and production team with strong credentials lined up and we are all looking forward to starting filming.”

Other actors in the cast include Paul Kaye (Game of Thrones), Anthony Head (Buffy the Vampire Slayer), and Kadiff Kirwan (Call the Midwife).

Filming wrapped in August 2019, and was shot in and around “Manchester, Bolton, and Stockport,” as Tyla reports. Saunders could be seen jovially filming the series in Manchester City Centre last March, embracing her on-screen daughter.

Stream The Stranger from Jan. 30 on Netflix.

More like this
6 'Happy Valley' Easter Eggs You May Have Missed
By Sophie McEvoy
'Consent' Is Not Just One Person’s Story, But Hundreds
By Shahed Ezaydi
Claire Foy Spoke Out About 'The Crown's Gender Pay Gap
By Sam Ramsden
Olivia Colman Stars In First-Look Trailer For BBC's 'Great Expectations'
By Sabah Hussain and Sam Ramsden
Get The Very Best Of Bustle/UK
Sign up for Bustle UK's twice-weekly newsletter, featuring the latest must-watch TV, moving personal stories, and expert advice on the hottest viral buys.