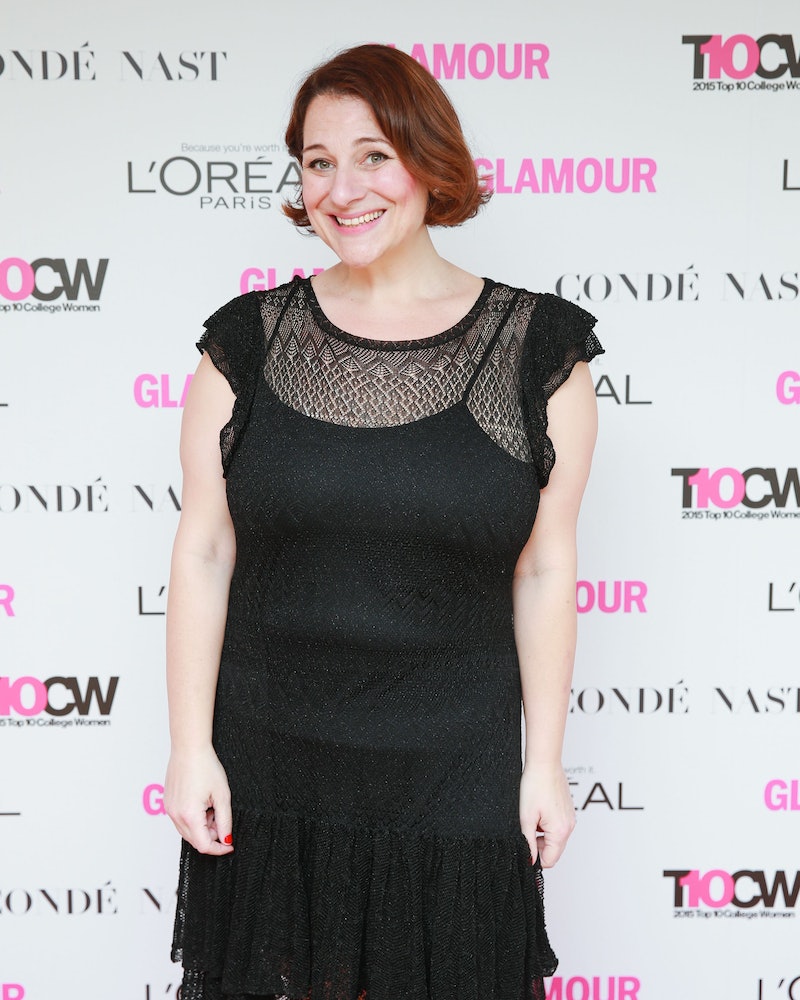 After the 2016 presidential election, #1 New York Times bestselling author Jennifer Weiner thought she knew what kind of novel she wanted to write. It would be dark, it would be dystopian, and it would tell the story of a world in which abortion and contraception became illegal. "The problem was," Jennifer Weiner tells Bustle, "that book was more about issues than about characters, and as novelist Tayari Jones wisely observed, when you’ve got a book that’s about problems instead of the people having those problems, you don’t have much of a book at all."

Instead, she wrote Mrs. Everything, a topical novel about about sisterhood, heartache, hope, and womanhood that takes readers through the "herstory" of the second half of the 20th century. It is the In Her Shoes author's first novel in over four years, and Bustle has an exclusive first look at the cover below.

"...as novelist Tayari Jones wisely observed, when you’ve got a book that’s about problems instead of the people having those problems, you don’t have much of a book at all."

The "story of women in America" told through one woman's eyes, and the eyes of her sister, Mrs. Everything follows Jo and Bethie Kaufman, two daughters of 1950's suburban Detroit. In the era of white picket fences and the American dream, Jo struggles to adhere to the expectations of traditional femininity. Bethie fits right in with her dresses and bubbly personality, but her love for men threatens to tarnish her good girl reputation.

But when the sisters head off to college in the 1960s, their roles slowly start to reverse. Jo gets involved with the nonviolence movement, but it is Bethie who leaves school in favor of sit-ins and mind-expanding drugs. Over the course of the next several decades, both women make very different choices — choices that, years later, leave them with hard questions about themselves and the world.

Bustle has a first look at the cover of Mrs. Everything, below:

"I wanted to write about a woman who missed everything — who missed her chance to participate in the great youth movement, the war protests, the counterculture, Woodstock, and also her chance at true love," Weiner says. "And so — 'Mrs. Everything.' When you say it out loud, it’s 'misses everything.'"

Weiner credits her husband with coming up for the clever title for her new novel, but everything else about Mrs. Everything comes straight from the author's heart. After realizing her initial ideal for a dystopian novel wasn't right, Weiner says "I knew that I still wanted to write about women in the world — about what’s changed and what hasn’t. It felt like the most urgent work that I, as a writer, could do. But, instead of starting with issues, I started to think about my mother’s life, and her choices, and what’s changed and what hasn’t."

"It felt like the most urgent work that I, as a writer, could do."

In writing Mrs. Everything, she found herself examining her own relationship to feminism, as well as her mother's and daughters' relationship to it. "I think it’s hard for daughters to understand the way their mothers’ lives were circumscribed, the way tradition and expectations dictated their choices, and who they would become," she says. "I couldn’t see my own mother’s limitations. I doubt my own daughters will be able to see mine. And I’m not sure my mother’s generation could have predicted the way potential can sometimes feel like a curse."

Hopefully, though, Mrs. Everything will illuminate some of those limitations and help create a better understanding of the past, the present, and maybe even the future. "A lot of people think about fiction in general, and especially books like mine as pure escape, as just entertainment, something to keep you amused on the beach or on a plane, and yes, good novels should do that," Weiner says. "But fiction is always in conversation with fact, with the truth of a specific moment, and it reflects the lived experiences of its author. And, of course, the personal is always political."

"But fiction is always in conversation with fact, with the truth of a specific moment..."

It might not be the dystopian novel she thought she would be writing, but Mrs. Everything is a timely book about womanhood and sisterhood, heartbreak and hope, and it marks the welcome return of a beloved author. It's possible the only one looking forward to its arrival more than fans is Weiner herself.

"My hope is that this book will have everything that readers have come to expect from my novels — that it will be funny and engaging and observant; that it will have characters who feel like women you know," says Weiner. "I hope that the book also has some things to say about The Way We Live Now, and that, wherever you find yourself in your own life, whether you’re a Baby Boomer, or a Gen-Xer or a Millenial, whether you’re gay or straight, divorced or single, a mother or happily childless, you will see yourself, and women you know, on these pages. "

Mrs. Everything will be available from Atria Books June 25, but you can preorder your copy from Amazon, Indiebound, or wherever books are sold today.