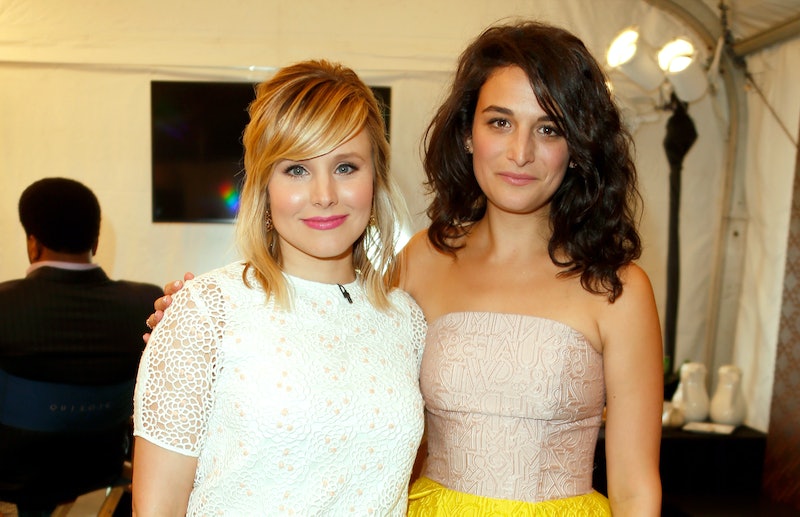 Some adorable animated heroines are about to get a brand new sound. On Wednesday, June 24, in response to the ongoing Black Lives Matter movement and calls for accountability, both Jenny Slate and Kristen Bell announced they will no longer voice Black characters on their respective animated series, Big Mouth and Central Park. Both actors have also requested that the shows' creators replace them with Black or mixed race actors, to better represent the characters' lived experiences.

Slate — who has played nerdy Missy since Big Mouth's premiere in 2017 — announced her decision to step down from the role in an Instagram post on Wednesday. "At the start of the show, I reasoned with myself that it was permissible for me to play 'Missy' because her mom is Jewish and White — as am I," Slate wrote. "But 'Missy' is also Black, and Black characters on an animated show should be played by Black people."

She continued by acknowledging that "my original reasoning [in accepting the role] was flawed, that it existed as an example of white privilege and unjust allowances made within a system of societal white supremacy, and that in me playing ‘Missy,’ I was engaging in an act of erasure of Black people." Though Slate noted that she can't fix the mistakes that she's made regarding racial injustice over the course of her career, she explained that "ending my portrayal of ‘Missy’ is one step in a life-long process of uncovering the racism in my actions."

"I can't change the past," the comedian continued. "But I can take accountability for my choices." Slate added that she plans to continue to "engage in meaningful anti-racist action" and to listen to feedback from the Black community and "take responsibility" for any ways she has contributed to injustice. "Most importantly, though, to anyone that I’ve hurt: I am so very sorry," Slate concluded her post. "Black voices must be heard. Black Lives Matter." Big Mouth's creator and star, Nick Kroll, addressed Slate's announcement with an Instagram post of his own, which was also signed by the show's co-creators Andrew Goldberg, Mark Levin, and Jennifer Flackett.

In his statement, Kroll wrote that he and the rest of the executive team "wholeheartedly agree" with Slate's decision, and that they plan to recast the role with a Black actor. "We sincerely apologize for and regret our decision to cast a white actor as a biracial character," the statement reads. "We made a mistake, took our privilege for granted, and we’re working hard to do better moving forward." Season 4 of Big Mouth has already completed production with Slate voicing Missy, but Kroll and the creators plan to "further grow Missy's character" with a Black actor beginning with Season 5.

Shortly after Slate and Kroll's announcement, the creative team behind Apple TV+'s Central Park announced that Kristen Bell will no longer voice Molly, the biracial daughter of the show's lead character, Owen Tillerman (Leslie Odom Jr.). "This is a time to acknowledge our acts of complicity. Heres 1 of mine," Bell wrote on Twitter, where she shared the official statement from the show's creators, which revealed that Bell will be recast in a new role while a Black actor will be hired to replace her as Molly.

"Playing the Molly in Central Park shows a lack of awareness of my pervasive privilege," Bell wrote. "Casting a mixed race character w/a white actress undermines the specificity of the mixed race & Black American experience. It was wrong and we, on the Central Park team, are pledging to make it right." Bell concluded her statement by noting she is "happy to relinquish this role to someone who can give a much more accurate portrayal and I will commit to learning, growing and doing my part for equality and inclusion."