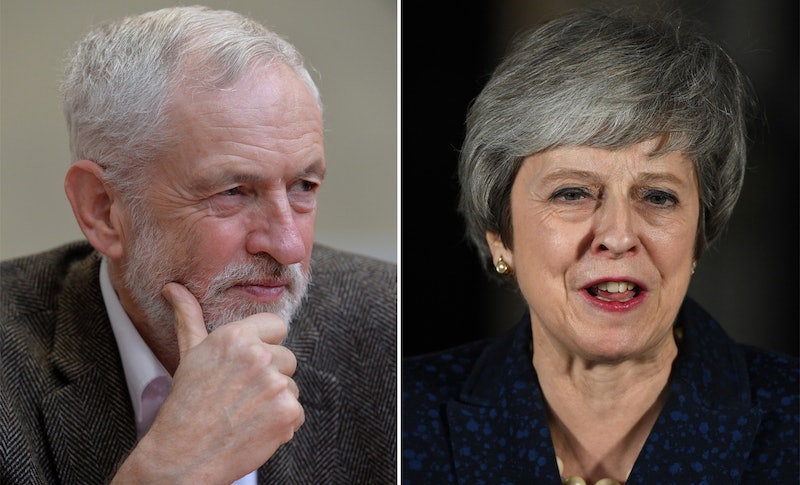 It's completely clear to anyone with a semblance of interest in British politics that the leaders of the Conservative and Labour parties do not get along. But despite disagreeing on just about everything, the two political leaders are expected to behave professionally. So when people claimed they saw Jeremy Corbyn call Theresa May a "stupid woman" on camera, it's unsurprising that everything kicked off in the House of Commons.

During Wednesday's session of Prime Minister's Questions, the prime minister faced yet more debate over Brexit from Labour leader Corbyn. May accused Corbyn of using "pantomime" techniques regarding a no confidence vote. As May sat down after her speech, Corbyn appeared to say something under his breath. As the BBC reports, it was alleged by some that the words he uttered were: "Stupid woman." Mr Corbyn denies the claim, saying he said "stupid people." He later made a statement in parliament, the BBC reports, saying:

During prime minister's question time today, I referred to those who I believe were seeking to turn a debate about the national crisis facing our country into a pantomime as "stupid people." Mr. Speaker I did not use the words "stupid woman" about the prime minister or anyone else.

As the Daily Mail reports, Corbyn's utterance wasn't picked up by microphones but was seen on camera and was openly discussed by several MPs in the House of Commons. Conservative MP Paul Scully asked the prime minister if she had heard what Corbyn had said, to which she replied: "I think that everybody in this House, particularly in the hundredth anniversary of women getting the vote, should be encouraging women to come into this chamber... and should therefore use appropriate language."

As the session ended, several members of the Conservative Party demanded that Corbyn be made to apologise by Speaker John Bercow. He said he "did not witness" the comment and therefore couldn't "be expected to "deprecate the behaviour," the Mail reports.

Anna Soubry, also a member of the Conservative Party, openly stated that a Conservative MP who had said something similar to a Labour MP would have been quickly confronted:

With great respect to the chair, I have to say this: If it was one of my male colleagues on this side of the House that had used that expression against a woman on the front bench on the opposition, you sir would take action immediately. Please would you deal with it as you often do, Mr. Speaker, in a fair way, but also from the point of view of women in this House who are fed up over decades of being abused by men.

A spokesperson for Corbyn earlier denied that the Labour leader called May a "stupid woman." "I don't think there's any basis for an apology," the spokesperson told the BBC. "As I understand it, he said 'stupid people.'" After being asked why some lip readers had verified the "stupid woman" comment was true, the spokesperson added: "Lip reading is open to doubt — he is adamant he didn't say it." They finished by stating that Corbyn has "no time for misogynistic statements."

However, one lipreading teacher called Alison, believes Corbyn did in fact say "stupid people." She wrote a Twitter thread explaining the different mouth shapes that the various sounds make and described the saga as "more bulls**t by Parliament, politics, and the media" to deflect attention away from the bigger issues at hand such as Brexit.

This didn't stop the chaos descending onto social media with plenty of people, both MPs and members of the public, chastising Corbyn as well as supporting him.

Of course, it's impossible to prove what Corbyn said. But either way, perhaps we can take some heart from the fact that people are disgusted at the idea of someone using the language "sexist woman." It doesn't seem that long ago that it might have been overlooked.