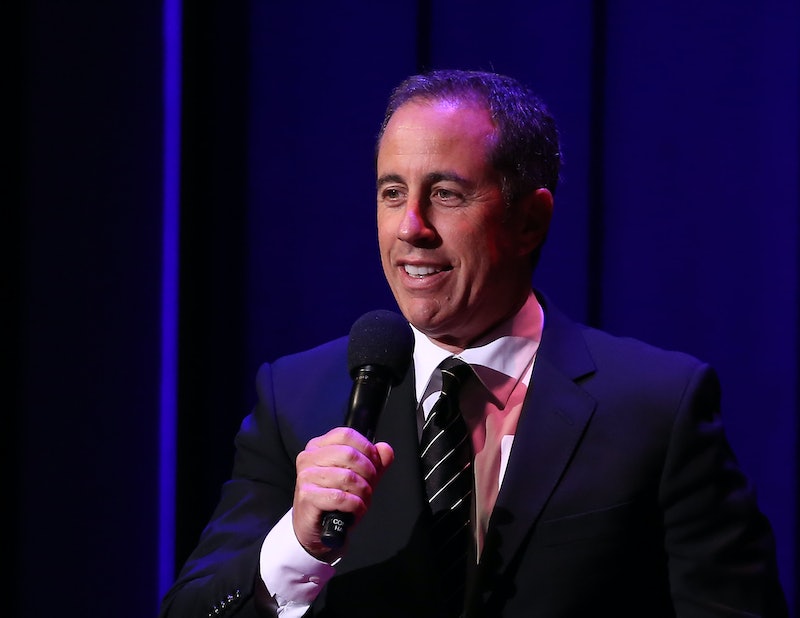 Get ready to feel uncomfortable. While giving an interview Monday on the red carpet for a National Night of Laughter and Song in Washington D.C., Jerry Seinfeld wouldn't hug Kesha. The singer asked the comedian three times for a hug and he refused her all three times. It's as awkward as it sounds, especially when you watch it for yourself and hear their exchange.

The now highly-discussed moment was revealed in a video shared on Twitter by WUSA 9 and 94.7 Fresh FM radio host Tommy McFly. "LAST NIGHT @KeshaRose found out @JerrySeinfeld is not a #Hugger -- Is it hard to be a non-hugger in 2017?"

Here's how it all went down. The former Seinfeld star was just chatting away when Kesha came out of nowhere. "I’m Kesha, I love you so much!" she said to Seinfeld. She then asked, "Can I give you a hug?" To that, the 63-year-old actor replied, "No thanks." Kesha didn't give up and asked him again, "Please?" Seinfeld responded, "No thanks." Then, Kesha pleaded, "A little one?" He then refused again by saying, "Yeah, no thanks."

After the painfulness, Kesha walked away and can be heard saying in the background, "Aw! He won't give me a hug!" Seinfeld laughed it off and then made quite the shocking comment. He said, "I don’t know who that was." McFly informed him that it was Kesha and then Seinfeld said, "OK, well, I wish her the best."

Kesha has yet to comment on the hug snub.

As unpleasant as it is, I can't blame Seinfeld. I mean, I don't get how he has no idea who Kesha is (he clearly needs to become acquainted with her music, stat), but I totally relate to him not wanting to give someone who he considers a stranger a hug. I certainly wouldn't, either.

There's a chance Seinfeld thought Kesha was a random fan on the red carpet, so that would be reason enough for him to deny her multiple times. I can only imagine how often celebrities are approached by fans asking for hugs or autographs or whatever. And at times, they just might not be in the mood or feel comfortable doing so. That's a legitimate reason for not wanting to hug someone you don't know.

I feel for Kesha, because I would hate to be snubbed by someone who I admired, but I totally get where Seinfeld is coming from. That said, the moment makes me feel just as awkward as I'm sure everyone else who has watched it does.