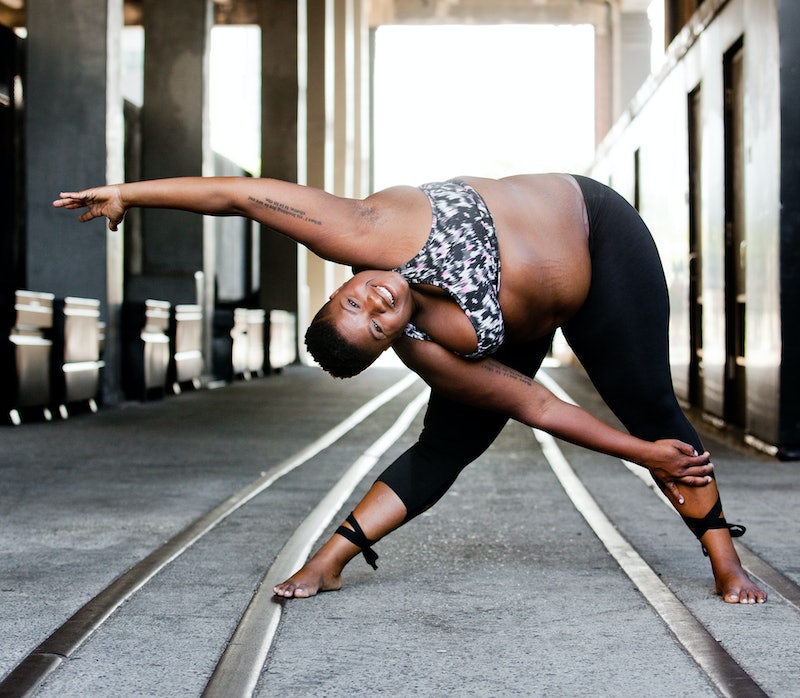 Yoga gives you a "yoga butt." Yoga is what women do to get thinner. Yoga is about weight loss. Sure, these are unhealthy stereotypes associated with yoga and other wellness practices, and they're certainly not reflective of reality. But proclaiming this fact, out loud and proudly, is still somewhat of a radical act. That's why wellness blogger and yogi Jessamyn Stanley is so beloved: She dares to call out how the yoga community can be limiting and unwelcoming to those who don't fit a particular image. Amen.

Stanley teaches classes all over the world with the mentality that yoga is for every body. There is no shape, experience level, or person who can't become a yogi, according to Stanley. The Durham, N.C., native boasts a philosophy that her practice should make you ask, "How do I feel?" rather than, "How do I look?" Her stance is rare, and it's why she's one of Bustle's 2018 Rule Breakers.

Here, she explains where she's coming from, in conversation with Bustle Lifestyle Editor, Melanie Mignucci.

Melanie Mignucci: What does the term "rule breaker" mean to you?

Jessamyn Stanley: I think the fact that I would be considered one says a lot about the rules of our society. ... I was raised in a fairly conservative family, overall. My parents are very much rule-abiders, and definitely encourage me to be that way. I was definitely raised in an environment in which rules were valued, and it's not even that I don't see the benefit in having rules. I'm not anti-democratic, I'm not anti-government, I think that it's important to have some kind of standard that we're all gonna follow.

I'm not really changing anything, I'm just making space for who I actually am.

But I also think that there are a lot of rules that are truly arbitrary, and that are created to uphold a status quo. There [are] many different status quos, and I think that I don't want to live my life making decisions based on things that are going to make other people comfortable all the time, if it's not gonna make me comfortable all of the time.

MM: What is the rule that needs to be broken more in the fitness space and in the yoga space?

JS: I think the idea that we practice fitness for anyone other than ourselves, or that we practice wellness for the outside world, that our bodies need to look a certain way for other people.

Whenever you see people who are plus-size fitness people on social media, if they practice a lot and if their body has any physical change, you'll notice in the comments that people are like, "Wow, you look great. Good job. Keep it up." You know, that whole mentality of working toward this, essentially, "Invasion of the Body Snatchers"-type situation in which everybody is exactly the same.

We have to stop trying to find our reflection in mirrors that are not going to reflect us. They're just not going to.

That's not the point of wellness. The point of wellness is that you take care of yourself so that you can be of service to others and be of service to the universe. There [are] so many things that we do that are things that are harmful in a long-term sense, and we can't even have that conversation because everyone is so obsessed with the way that we look for each other.

MM: How do you approach the conversation of not just representation for women of color in this space, but also advocate for equal opportunity as well?

JS: I think that for a lot of people of color who work in the wellness space, and then more specifically Black people who work in the yoga world, I think there's a tendency to feel like you have to mimic whiteness as much as possible in order to be accepted, in order to get a job. I actually think that one of the great gifts that the universe gave me is that I've never been accepted by literally anybody. Like, even certain Black people who work within the fitness and wellness space are critical of my presence in the space. Just to see a yoga community that is actually representative of the world that we live in, as opposed to just the same song that the media in general has been singing for so, so long. We have to stop trying to find our reflection in mirrors that are not going to reflect us. They're just not going to.