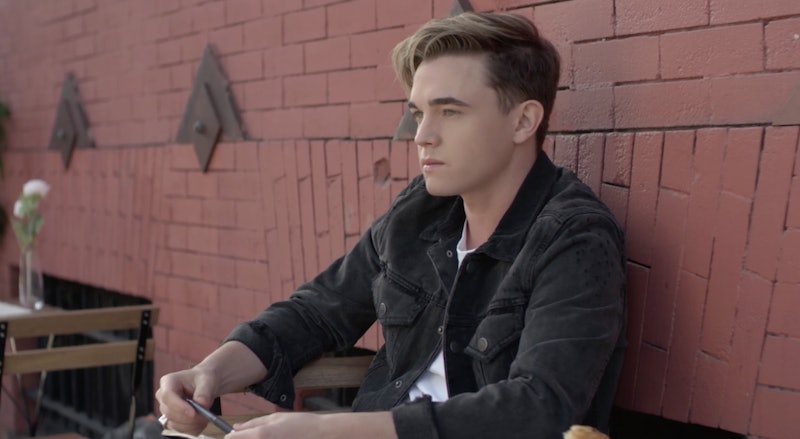 Either we're in a portal straight to 2004, or this guy is forever frozen in time. Jesse McCartney dropped a new song and it's like nothing has changed, which is incredible news for his original fans from back in the day. Not only does the singer look like a spitting image of his 16-year-old self (only with a new haircut), he sounds like him too. McCartney is making more than a comeback — he's making it quite a time to be alive.

His new song "Better With You" definitely has "Beautiful Soul" vibes, only a little less pop-y and with more of a grounded, acoustic feel. While the singer, now 30, is back on the scene, it's good see he isn't moving too far from the genre fans loved him for most: romance. McCartney's signature theme in the 2000s was love, and the ups, downs, and vulnerabilities that come with it. Luckily, that theme is intact and explored even more deeply in "Better With You."

After his four-year hiatus, his new music video shows a man (himself) and woman go through bliss, fights, and all people experience when they're in love. Viewers might as well grab their popcorn. And on top of the compelling love story, the song is super feel-good and catchy.

Although "Better With You" is a love song, it's universal and relatable to anyone enduring the ups and downs of life. The lyrics include lines like: "For every laugh there is a silent cry, for every day there is a darker night" and "Sometimes this life doesn't treat us right, and I don't know what to do." It gives listeners hope about the possibility of finding someone to have a bright future with, but can also be applied to any loved one who makes life better.

And for any fans who were wondering about McCartney's relationship current status, it seems "Better With You" may be somewhat autobiographical. In the nearly four years since McCartney's last album, In Technicolor, the artist spent time traveling with his girlfriend, barbecuing, and getting into wildlife documentaries, according to Paper.

McCartney is dating actor Katie Peterson, and the two have been an item for more than five years. The singer seems to have drawn inspiration from Peterson in his new song, as taking time off and being with her has helped him find his center. McCartney further explained to Paper why he took his work hiatus to begin with. He wanted to "see a country without having to worry about working in it, not seeing anything but the hotel room and radio stations... [or] being looked at or judged." And yes, he had his girlfriend by his side.

But again, "Better With You" is more than a sweet love song for teen girls (and even adults) to swoon over. As he took time off, McCartney was able to take in the world and its sad realities and give people a good dose of hope. He explained to Paper how it's an "uplifting message that was written during a turbulent time socially and politically. The world felt like it was unravelling."

Leave it to McCartney to reemerge and make fans' hearts just a little bit happier.