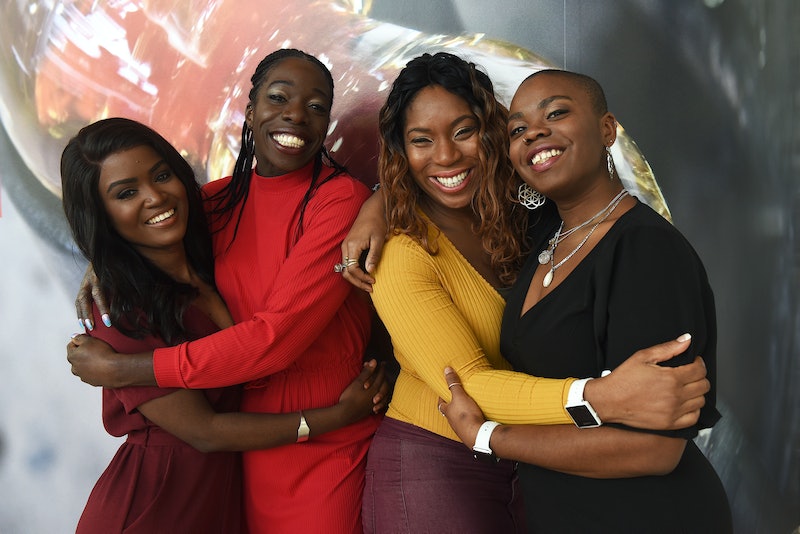 Journalist and radio presenter Jessie Aru Phillips is from Liverpool. She currently works on BBC Radio 5 Live, where she hosts The Sista Collective, the BBC's first podcast led by Black British women. Between 2014 and 2016 she worked as a reporter for Forces TV, reporting from Kuwait and Afghanistan, and she previously represented Great Britain in athletics.

It might sound obvious, but looking after myself is a fundamental part of my beauty routine. Before I even start thinking about makeup, I’ve found that getting enough sleep and drinking lots of water really is the best thing for clear-looking skin. And though I’m always busy at work, I try to work out when I can. I make sure I sweat as much as possible when I go to the gym or for a jog. That might sound completely gross, but I’ve found that it’s great for my skin as it opens up the pores.

In terms of my day-to-day routine, I like to keep things pretty simple. I’ll always get up and have a shower, using a minty shower gel to make me feel fresh and awake. I’ll cleanse my face with a gentle tea tree facial wash to prepare my skin for the day. Most days, if I’m in work, I will often just wear lip gloss and that's it. If I’m feeling bold, I’ll maybe add a bit of gold highlighter to my cheekbones. But my journey to developing a proper makeup routine was a late one, and I pretty much only wore lipstick until my early twenties. I used to compete for Great Britain in athletics, so back then, wearing foundation wasn't something I did, as I hated the feeling of it on my skin when I ran. I know every woman is different and it's down to personal preference, as for some women working out with makeup makes them feel confident, but it wasn't for me.

In general, my beauty routine makes me feel great — it wakes me up at the beginning of the day and I always look forward to a long soak in the bath once the day is over. I'm currently obsessed with this gorgeous lavender-scented bath foam and body butter I’ve bought and I’ll use this most nights. My mum taught me that moisturising needs to be a huge part of my routine. She is 75 years old this year and she looks incredible — barely a day over 60. This is in part because she has always looked after herself by keeping fit and she’s always been into beauty. She’s kept on top of her skin care routine with decent products and creams, and when we were little she would cover us in olive oil. Sounds odd doesn't it? But it gave us a real glow and we never had dry skin! Beyond the kitchen cupboards, a staple in our household was cocoa butter. Not only does it smell amazing, but it’s also incredibly moisturising and makes your skin look so healthy.

You only have the skin you're in, and you’d better look after it! My skin can very easily dry out and even start looking a bit grey, so moisturising is really important. But self-care is key as well, which is why when I wind down at the end of the day, I practice mindfulness. There are some great apps that I have on my phone that help me relax and regulate my breathing. I find huge benefits in taking just 60 seconds to do some deep breathing. If you feel good and healthy on the inside, I think it shows on the outside.

My routine has changed a lot over the years. When I worked as a presenter for British Forces Radio, my job took me to places such as Kuwait and Afghanistan, where putting makeup on was the last thing on my mind. But whenever I worked in sunny locations, the Vitamin D did and still continues to do wonders for my skin. Even now when I go on holiday, when I come back I’ve found that I don't need to wear makeup for at least a month and it's normally just lip gloss and go. But now that I'm a part of BBC Radio 5 Live’s Digital Pilots team, I work between offices in London and Manchester.

I produce and present a podcast called The Sista Collective for BBC Radio 5 Live and BBC Sounds. It's a ground-breaking podcast for the BBC as it is the first time they have commissioned a home-grown podcast produced and led by black women, a fact that I am really proud of. Being from Liverpool, it is really important to reflect diverse voices from across the U.K. I record at BBC Media City in Greater Manchester, which means I often get the first train out of London at the ungodly hour of 5 a.m. I need to get ready quickly to catch my train, so when I wake up, I jump in a shower and leave the house with my makeup in my bag. I’ve mastered the art of doing my makeup on the train, which takes anywhere from 30 minutes to an hour.

When I need to have my makeup done professionally for photos, I always check that the makeup artist booked is competent and confident in working with black skin.

The staples of my makeup bag are a good pore filler, a concealer from an inclusive and diverse brand, a foundation, a colourful eyeshadow palette, and a little compact highlighter for those days when I want my skin to pop. I usually get eyelash extensions done professionally, which saves me so much time spent doing mascara. I hate false eyelashes and struggle to use them. My colleague wears them most days and I’ve no idea how she does it — I find them too fiddly to use. For my lips, I tend to use lip balm and carry this on me at all times. I’ll only wear moisturising lipsticks or gloss, and I tend towards deep plum colours or berry tones. I’ll finish my makeup with a translucent setting powder and a spritz of gentle setting spray.

As well as producing The Sista Collective podcast, I am also a video journalist for the 5 Live Digital Pilots team. We aim to tell the stories of inspirational northern women and a lot of our videos have looked at different aspects of beauty and what it means to people. We’ve filmed at a beauty salon in Liverpool and spoken to women about the growing popularity of lip fillers. It was fascinating to talk to the women there about the Kardashian effect that has led to so many women wanting bigger lips, bigger bottoms, and curvier figures. We raised this issue on The Sista Collective because these are physical traits that many black women have naturally that were once mocked and now seem to be celebrated.

I am proud that Liverpool has a reputation for being glamorous and, of course, I am going to be slightly biased in that. It really is the L.A. of the U.K. Living between the two cities of Manchester and London and being from Liverpool, I definitely see the difference. I've been caught out on occasion for being too overdressed when out in London — there’s no such thing as too dressy in Liverpool! There are definitely negative stereotypes that persist about Liverpool too — for example, that everyone wears fake tan, false lashes, false nails. Clearly, fake tanning is something that I don't do. I think Liverpool girls just want to go out looking their best.

I’m really pleased that there’s a growing movement in the beauty industry towards embracing diversity, with lots of brands releasing ranges for darker skin tones. When I need to have my makeup done professionally for photos, I always check that the makeup artist booked is competent and confident in working with black skin.

When it comes to "beauty rules," I have more "lessons learned." I love the sun and as a black woman I fell into the trap of not putting on sunblock or sun protector on holiday. I visited Gambia a few years ago and packed vanilla oil to bring with me, one of my favourite notes to wear. Soon after I arrived, I lathered the oil on and sunbathed at the hottest part of the day. That evening my skin was in absolute agony. I had never experienced pain like it and I didn't know what it was. My then-boyfriend told me it was sunburn. I didn’t realise black people could get sunburnt! It was a painful lesson but I’m glad I learned it. I do feel more could be done to bring awareness around this within the black community. So happily for my skin, the rule I imposed to not wear sunblock when I was younger has now been broken.

If I had any advice for my younger self it would be this: Try and continue doing your daily face saunas. I know they take an age, but you'll appreciate them later in your life!