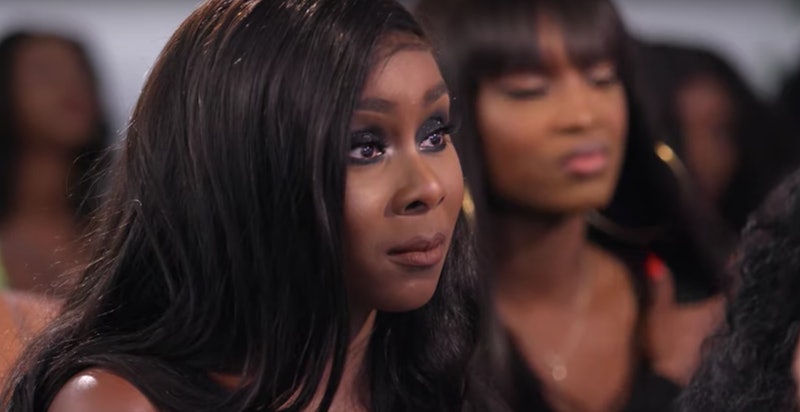 Since Tarana Burke first started the hashtag back in 2006, millions of people have shared their MeToo stories. And it's only encouraging more survivors of sexual assault to come forward. For example, in this week's Love and Hip Hop: Miami, Jessie Woo talks about being sexually assaulted on this week's episode, and the other women on the show rallied around her in support. It's emotional, but it's also a beautiful thing to watch women rally around together like that.

In this exclusive clip from the episode, Trina has taken Jessie, Joy, and Chinese Kitty to an event at which Burke is speaking. It's a small and intimate event, "full of survivors," as the host says. From the stage, Burke notes that there have been 19 million tweets around MeToo just in the last year alone. She adds, "we spend most of our time trying to forget, but we recognize the pain. That's literally what MeToo is — it's empowerment with empathy. The bit of empathy you get from me saying, 'I see you, it happened to me, too'....this thing tried to kill us, and it failed."

Listening to Burke, Jessie is visibly moved, as Trina grabs her arm from behind for comfort. Given the small space, Burke catches Wu listening, stops, and says, "I see you." And she reiterates that Jessie can feel safe and supported in the room. Burke's response to Jessie is exactly what she had just been talking about — the power of someone actually listening to you can be strong.

Jessie then begins to talk Burke and the other women in the room say that they "believe her." She said that was allegedly raped by someone in the music industry. Jessie continues:

"My question is, that person is living an abundant life. Touring, working with artists, I would love to work with, you know? How do I live with that? How do you really feel free when you don't see some type of punishment for that person? How do I not feel small anymore?"

Burke, along with her fellow cast mates, listens carefully to her story.

It was emotional to watch, and had to be to experience as well, but Trina did a compassionate thing by bringing Jessie into that room. Earlier in the episode, Jessie confided in Trina about her alleged assault. Jessie told Trina that she was allegedly raped at an industry event. "As a rape victim, you feel like you’re powerless. You feel like you’re a loser–you feel so low. You feel like you don’t matter. And for a long time I felt that knowing that, this person did that to me," she said.

"If that’s what I have to do to sing, I don’t want to sing anymore. They took something from me. I don’t want nobody taking anything from me no more," Jessie added. In her one-on-one with the camera later, she says that she's telling her story so that other people watching know that they're not alone either.

If anything, her sharing her story — and Trina giving her the space to do so — on the show, is one step towards whatever healing she has to do. Hopefully, others are out there listening, too.