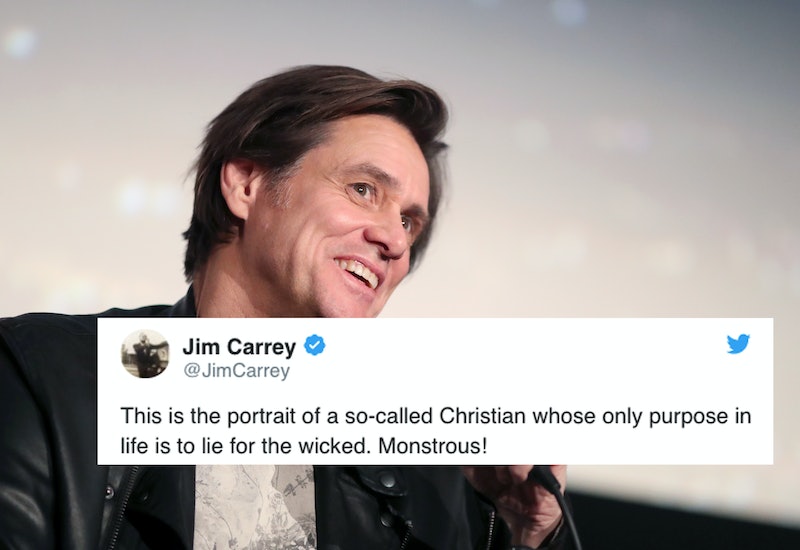 In case you hadn't heard, Jim Carrey is a visual artist now. Most notably, he's turned to the venerable art of political caricature — specifically, to caricatures of various members of the Trump organization. This is not always met with universal acclaim, however. Jim Carrey's portrait of Sarah Huckabee Sanders has infuriated Twitter because of what many deem to be an unflattering portrayal and a low blow in the description that he posted along with it — though a spokesperson for Carrey would not confirm that the portrait was indeed of Sanders.

The picture portrays an angry-looking, dark-haired woman, with arched eyebrows and a mouth wide open, as though she was in the middle of a heated statement.

"This is the portrait of a so-called Christian whose only purpose in life is to lie for the wicked. Monstrous!" reads the caption that Carrey posted with the portrait on Twitter.

This caption, along with the portrait's likeness to the White House press secretary, left little doubt in the Twitter commentators' minds that Carrey had indeed to paint a picture of Sanders. She is open about her Christian religion, though perhaps not so outspoken about it as her father Mike Huckabee. As press secretary in the Trump White House, she has been caught in numerous falsehoods defending the White House.

Carrey's likeness of Sanders, however, has drawn harsh criticism from commentators. An article in AV Club called it "incredibly mean-spirited," and people on Twitter lobbed personal insults at Carrey in addition to criticizing the portrait. "@JimCarrey why did your girlfriend kill herself?" said one Twitter user, referring to the suicide of Carrey's late girlfriend Cathriona White. "And this is the picture if a has-been, who hasn't put out a decent movie in 15 years," wrote another, along with a picture of Carrey.

Overall, people seemed to take the most umbrage at Carrey's use of the word "Christian," implying that criticizing someone for their religion was out of bounds.

Sanders isn't the only member of the Trump organization to have drawn Carrey's artistic ire, however. In February, Carrey posted a cartoon of White House Chief of Staff John Kelly being trampled by a carousel horse driven by a tweeting figure.

"All who enter his crooked carnival with integrity are doomed to leave without it," the caption read. "General Kelly has been trampled by his own compromise. Who dares be the next to ride the carousel of fools?! Muahahaha!!!"

Carrey also captioned a cartoon of House Intelligence Committee chair Devin Nunes dressed as an old-school diner waiter with the words "'White House delivery boy; can I take your order?!' ;^P" Also in the cartoon are the words "Nothing Burgers" and "One pointless memo coming up! Will that be all Mr. P?"

The other caricatures also draw their fair share of criticism of — and defense of — Carrey, although the focus tends to be slightly different since they're less personal than the cartoon portraying Sanders.

"You are a pathetic piece of liberal garbage. Liberalism. Find a CURE," wrote one Twitter user in response to the Nunes cartoon. In contrast, someone replying directly about that user wrote "Jim, I knew you are an amazing actor, but I never knew what an intelligent human being you are! I love who you are and what you stand for!"

Political cartoons are divisive by nature, and Carrey has probably figured that out by now. However, it doesn't seem like he has any time of slowing down his production.