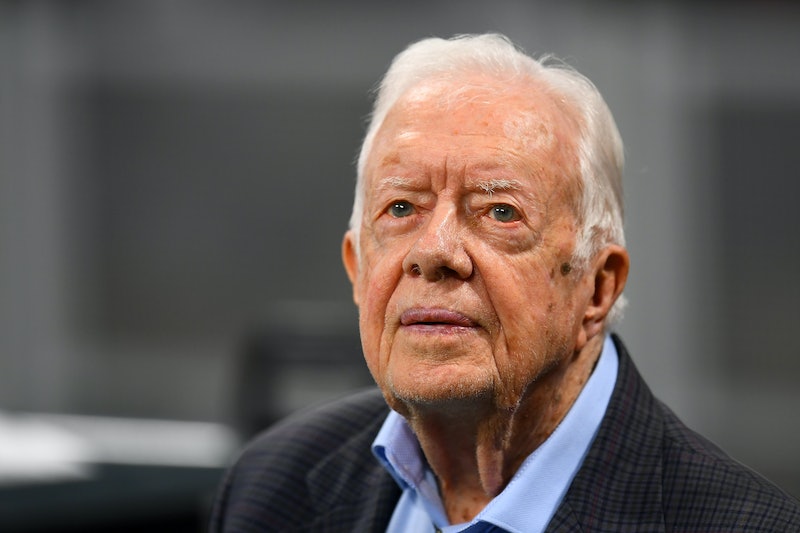 A former U.S. president has commented on the appointment of Brett Kavanaugh to the Supreme Court. At Emory University on Wednesday, Jimmy Carter said that Kavanaugh is "unfit" to serve on the bench and that confirming him was a "very serious mistake," as the school newspaper The Emory Wheel reports.

Carter made the assertion while speaking to an Emory classroom full of students helping with the research behind Professor Hank Klibanoff's podcast "Buried Truths." The professor interviewed Carter on many topics, including Dr. Christine Blasey Ford's allegation of sexual assault against Kavanaugh (which he denies).

"Whether or not he attempted to rape that woman," Carter said, as heard in a video posted on Facebook by a student, "I thought he was temperamentally unfit to serve on the Supreme Court because of his outburst during the hearings."

Kavanaugh delivered much of his testimony with aggression last month. He shouted and dismissed Ford's accusations as "revenge on behalf of the Clintons." His overtly partisan remarks made many question whether he would be able to uphold the Supreme Court's obligation to impartiality.

Perhaps most notably, Carter said that he believes Ford's allegation. "Judging by his previous legal career, he was very qualified," he said of Kavanaugh. "But I believe the one who testified against him, I think he did attack her sexually. And I know that I saw him lose his cool."

Student Katherine Dautrich posted the video on Facebook on Wednesday and wrote that she appreciated his willingness to believe Ford: "It was really nice to hear that from any president of the United States right now."

Carter also pointed out that "most of the American people were not in favor of [Kavanaugh] being on the Supreme Court." That was true before his nomination and it's still true now: A poll published last week by The Washington Post and ABC News found that 51 percent of the country disapproves of his appointment and 41 percent approves.

As for why Carter believes Kavanaugh was appointed, he blamed congressional cowardice. "The Senate is quite subservient to Donald Trump and they're afraid of his displeasure," he told the class, "so none of them will say anything about Kavanaugh."

Carter isn't the first former president to speak publicly about the judge. George W. Bush supported Kavanaugh from the start and even lobbied for him to Sen. Susan Collins, a Maine Republican who was one of a few deciding votes at the final hour.

"He is a fine husband, father, and friend — and a man of the highest integrity," Bush said in a statement following Kavanaugh's nomination. "He will make a superb Justice of the Supreme Court of the United States." Kavanaugh worked for Bush while the former president was in the White House. He was first Bush's associate counsel, then became staff secretary, and in 2006 was appointed by Bush to a judgeship in the D.C. Circuit of the U.S. Court of Appeals.

More like this
Joe Lycett Just Took HIs David Beckham Qatar Protest To A Whole New Level
By Sophie McEvoy
Iran Has Issued A Death Sentence Over Mahsa Amini Protests
By Catharina Cheung, Darshita Goyal and Maxine Harrison
14 Pickleball Outfits That'll Serve Fashion On The Court
By Carolyn Steber
Matt Hancock's “Cringe” Jungle Karaoke Left Twitter Reeling
By Sam Ramsden
Get Even More From Bustle — Sign Up For The Newsletter