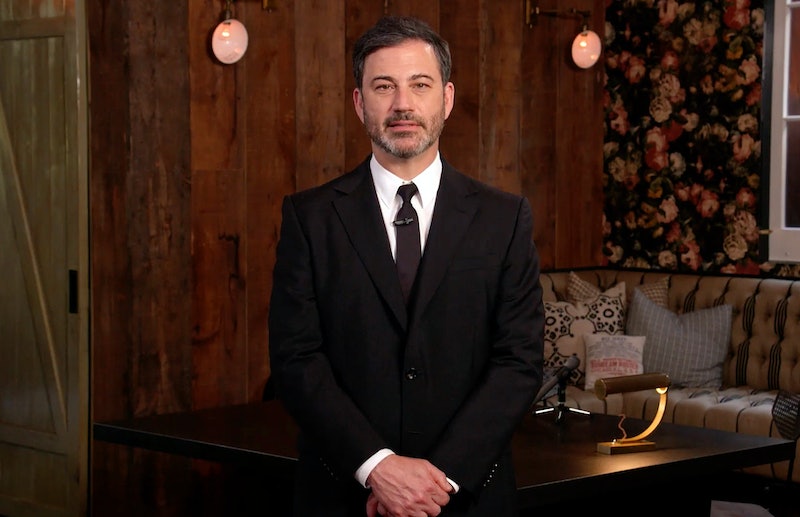 The show must go on — even, apparently, in the midst of a national pandemic. On Tuesday, June 16, ABC announced that Jimmy Kimmel will return to host the 2020 Emmy Awards, which is currently slated to air Sunday, Sept. 20 at 8 p.m. ET. No further details were given as to how exactly this typically star-studded event will take place, considering the ongoing coronavirus outbreak. Yet, the network seems fairly confident that the ceremony will indeed take place, with Kimmel as host, in some way, shape, or form.

"I don't know where we will do this or how we will do this or even why we are doing this, but we are doing it and I am hosting it," Kimmel, who will also serve as an executive producer, said in a statement, as per E! News. This will mark Kimmel's third time hosting the Emmys, having hosted the awards show back in 2012 and then again in 2016.

"We know Jimmy Kimmel will deliver a uniquely entertaining, funny and moving Primetime Emmys show," Karey Burke, president of ABC Entertainment, said in an additional statement. "He will tackle this momentous event with heart and humor, and bring some much-needed joy and optimism to our television colleagues and viewers at home."

The news comes as a bit of a surprise, given that the Oscars — which traditionally takes place several months after the Emmys — has already announced that its 2021 ceremony will be pushed back two months until April. Meanwhile, this will also be the first time in Emmys history that the Television Academy has canceled its annual Governors Ball event. They have also opted to make the 2020 Creative Arts Emmys a purely virtual experience so as to not risk the health and safety of the would-be attendees.

"This has been an incredibly challenging time for our industry; and though we are now making plans to get back to work, we know there are many still suffering from the work stoppage caused by the coronavirus,” Television Academy chairman and CEO Frank Scherma said in a statement on Monday, June 15, according to Deadline.

With so much being canceled and altered, it's difficult not to assume that the Emmys will face a similar fate as well, whether that means being postponed or going virtual and having Kimmel pander to an empty room while occasionally conducting various Zoom interviews with the winners.

More like this
Hayden Panettiere Admits "Addiction" To Alcohol & Opioids Before Going Sober
By Jake Viswanath
Everything To Know About The 'Pretty Little Liars' Reboot On HBO Max
By Mary Kate McGrath, Jack Irvin and Radhika Menon
'Schitt's Creek' Star Sarah Levy Named Her Baby Boy After Her Famous Father
By Jake Viswanath
Why Sadie Sink Is Hopeful Max Will Return In Stranger Things Season 5
By Brad Witter
Get Even More From Bustle — Sign Up For The Newsletter