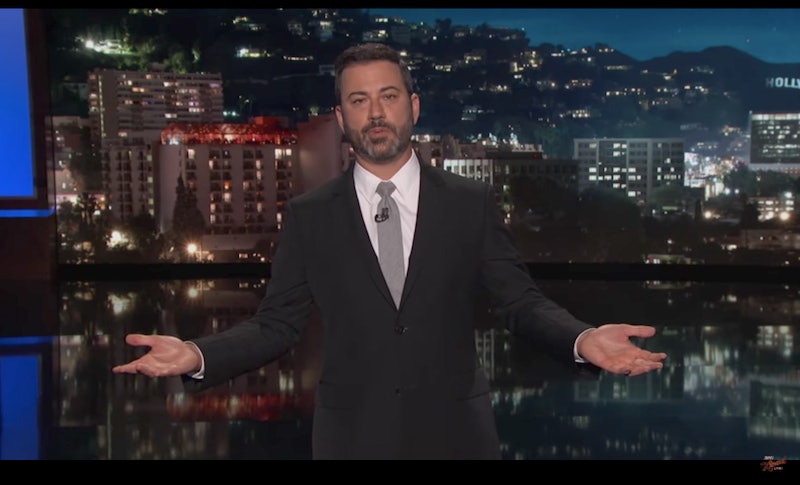 On Monday evening, late night show host Jimmy Kimmel spoke emotionally about the Las Vegas shooting, which killed at least 59 people and injured hundreds. Kimmel, who grew up in Las Vegas, paid tribute to the victims of the shooting as well as condemned members of Congress who have taken no action to curb gun sales and use in the U.S.

Kimmel opened his monologue by expressing the shock and horror that many people are probably feeling in the aftermath of the Las Vegas shooting. He also talked about the victims of the shooting and shared his absolute heartbreak for the families, saying,

Of course, we pray for the victims – and for their families and friends and we wonder ‘why’ even though there’s probably no way to ever know ‘why’ a human being would do something like this to other human beings who were at a concert having fun listening to music ... As a result of that this morning, we have children that are without parents and fathers that are without sons, mothers without daughters. We lost two police officers, we lost a nurse from Tennessee, a special ed teacher from a local school here in Manhattan Beach [California] ... It’s too much to even process. All these devastated families who now have to live with this pain forever because one person with a violent and insane voice in his head managed to stockpile a collection of high-powered rifles – and used them to shoot people.

Kimmel then went on to condemn the seeming government inaction that often follows mass shootings in the United States, with some members of the public and some politicians often saying "This is terrible, but there’s nothing we can do about it.” However, Kimmel asserted that he "disagree[s] with that intensely," and emphasized that there are things that can be done to help stop mass shootings in the U.S., but there is not enough will to do them.

Kimmel then took lawmakers to task for this inaction, accusing many of them, particularly Republicans, of being beholden to the gun industry. Kimmel particularly called out Republican party leadership for allowing such pervasive gun lobby influence, saying, "Senate Majority Leader Mitch McConnell, Speaker of the House Paul Ryan, a number of other lawmakers who won’t do anything about this because the NRA has their balls in a money clip, also sent their thoughts and their prayers today, which is good. They should be praying. They should be praying for God to forgive them for letting the gun lobby run this country, because it’s so crazy."

The late show host also called out a group of 56 Senators, whose pictures he shared in a photo collage behind him, for voting against a bill last year that would have closed gun purchase loopholes in the days following the Orlando Pulse Nightclub shooting. Kimmel also noted that the House of Representatives is planning on voting this week on legislation that would legalize the sale of silencers for guns, once again highlighting the notion that tragedy seems to do little, if anything, to stop lawmakers from passing pro-gun legislation.

Kimmel called on audience members take action and call their members of Congress, asserting that it is more important than ever for the public to let their representatives know that they do not condone the level of gun violence in the U.S.

Toward the end of his monologue, Kimmel emotionally conveyed that he believes that some issues have become so problematic in the U.S. that it has become increasingly difficult to continue his role as a late night comic without addressing these very serious problems. Kimmel expounded on these thoughts, saying,

I want this to be a comedy show. I hate talking about stuff like this. I just want to laugh about things every night, but that — it seems to becoming increasingly difficult lately. It feels like someone has opened a window into hell. And what I’m talking about tonight isn’t about gun control, it’s about common sense. Common sense says no good will ever come from allowing a person to have weapons that can take down 527 Americans at a concert. Common sense says you don’t let those who suffer from mental illness buy guns.

Overall, Jimmy Kimmel's moving monologue was an important reminder of the importance of taking action to combat gun violence — and to demand this action from members of Congress.