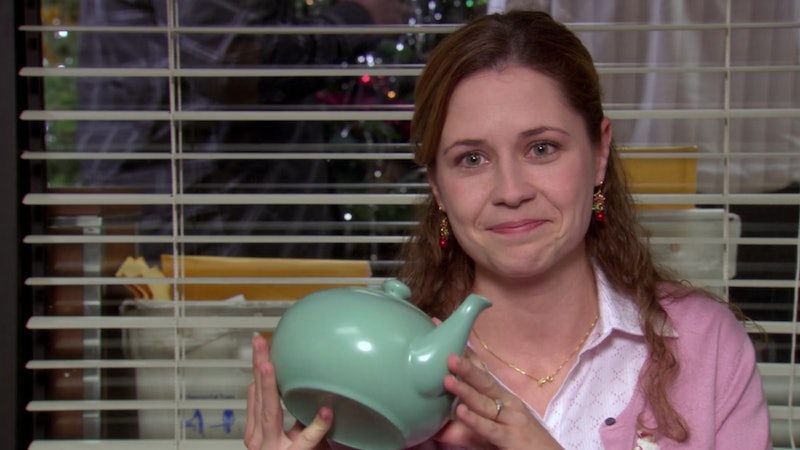 The most romantic Office mystery has finally be solved, and Jim and Pam fans are definitely going to want to take a moment to prepare themselves for the cuteness. During Feb. 19's episode of the Office Ladies podcast, hosts Jenna Fischer and Angela Kinsey discussed the famous Jim and Pam teapot note. And Jenna Fischer actually revealed what Jim's teapot note really said, answering a question fans have had for over a decade.

Ever since Jim chickened out of giving Pam a mysterious note in Season 2's "Christmas Party," fans have been dying to know what it said. Eventually, Pam read the letter in the penultimate episode of the final season. Whatever declaration of love was in there was so emotional that both Pam and Jim were brought to tears. And now we know the gist of what the message said — sort of.

While discussing Jim's meaningful present for Pam with her co-host and best friend Kinsey, Fischer said, "I'm going to say something that I've never said before. I also feel like I'm maybe gonna cry." Confirming that only she and John Krasinski know what was written in the letter, Fischer revealed that the note from Jim to Pam was actually a goodbye letter to Fischer written by Krasinski.

"I believe Greg [Daniels] suggested to John that he write a personal message from himself to me just saying what our time together on The Office meant to him," Fisher told Kinsey, all while fighting tears.

At this point in the series, they were wrapping up the final season, and it was a super emotional time for everyone. So much so that during the first take of the note-reading scene, Fischer said she cried uncontrollably. "The first take was probably not usable." She added, "It was the sweetest note."

While answering Office fan questions for TVGuide in April 2006 — when the back half of Season 2 was airing — Fischer said she didn't know what Jim's Season 2 note said, but that Krasinski told her he wrote it as Jim. However, as Fischer explained in the podcast, Krasinski wrote the Season 9 letter letter as himself, not Jim. It's unclear, but, it seems like there are two versions of Jim's teapot letter to Pam, one written by Krasinski as Jim, the other written as himself. Whatever the case, the Season 9 letter meant so much Fischer that she kept it, as she shared on Twitter in October of 2013.

On the podcast, Fischer said she wanted to keep the exact contents of Krasinski's note private, adding, "I will say just know it was perfect."

More like this
Kate Winslet To Star In Russell T Davies' 'Dark Season' Revival
By Sam Ramsden
OG 'High School Musical' Stars Reunited In Paris & "No Time Has Passed"
By Brad Witter
'Bel-Air' Season 2 Finally Has A Release Date & A New Trailer
By Brad Witter, Kadin Burnett and Sam Ramsden
How The Thanksgiving Episode Of 'Gossip Girl' Changed Pop Culture History
By Gabrielle Bondi
Get Even More From Bustle — Sign Up For The Newsletter