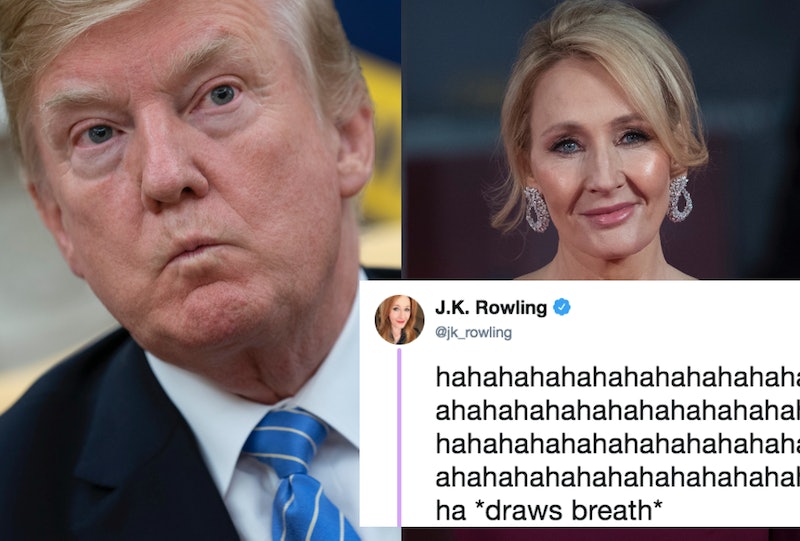 This won't be the first time that President Donald Trump has been corrected on his use of a particular word. On Tuesday, internationally acclaimed author of the Harry Potter series, J.K. Rowling, laughed at Trump's spelling in a tweet in which he wrote "pour over" instead of "pore over." It left Rowling in stitches, which was evident from her multiple tweets about the typo. The president has since corrected his spelling in a different tweet after deleting the one with the typo.

On Tuesday, Trump tweeted that the "mainstream media" was apparently obsessed with his misspellings — and ended up, ironically enough, incorrectly using one specific word. Trump tweeted, "After having written many best selling books, and somewhat priding myself on my ability to write, it should be noted that the Fake News constantly likes to pour over my tweets looking for a mistake. I capitalize certain words only for emphasis, not [because] they should be capitalized!"

What Trump intended to say was that the media liked to "pore over" his tweets, not "pour over." Pore over, as you already may know, means to minutely study the contents of an object, which would also include — you guessed it — someone's writing.

But he ended up using "pour over" and the irony of his tweet didn't seem lost on Rowling who tweeted three laughter-replete reactions. In one tweet, the critically acclaimed writer laughed about Trump's books and said that he had commissioned ghostwriters to complete them.

For the record, the ghostwriter behind Trump's The Art of the Deal, Tony Schwartz, has been critical against Trump in the past. In comments to The Nation, Schwartz said something that may help observers make sense of Trump's rant on Twitter against the media.

"[Trump] has adopted a pretty hard-right set of beliefs," Schwartz said in 2017. "I have reluctantly come to the conclusion that he believes what he says now, and that’s because his base, the people who still love and adore him, are on the far right — and that’s what compels him the most. I think he’s drifted into that more for emotional and psychological reasons than for political and ideological reasons."

Earlier that day, Trump had also criticized the media on Twitter — specifically The Washington Post. "The Washington Post is constantly quoting 'anonymous sources' that do not exist. Rarely do they use the name of anyone because there is no one to give them the kind of negative quote that they are looking for," he tweeted. "They are a disgrace to journalism but then again, so are many others!"

Rowling also pushed back against some of the people who did not agree with her laughing at Trump's tweeted diatribe. One Twitter user, whose username Rowling scribbled out, tweeted a theory, "The surprising thing is that [Rowling] can't see through [mainstream hysteria] after writing the most brilliant allegory of the exact battle of good [versus] evil we are enduring. The Ministry of Magic circa book 5/6 is the deep state. Rita Skeeter is alphabet soup news agencies. Trump is Snape."

Rowling simply retweeted a screenshot of the image and said, "Yeah, no."

She also had a message for those threatening to burn her books over her tweets against Trump. Some social media users had a theory that Trump was ultimately the "good guy" in Rowling's fictional world. That hypothesis couldn't be more inaccurate for the author. "Sweetheart," Rowling said, "if you read the whole of Harry Potter and thought the author would support an authoritarian braggart who's too dumb to know how dumb he is, burn away. And so will I."