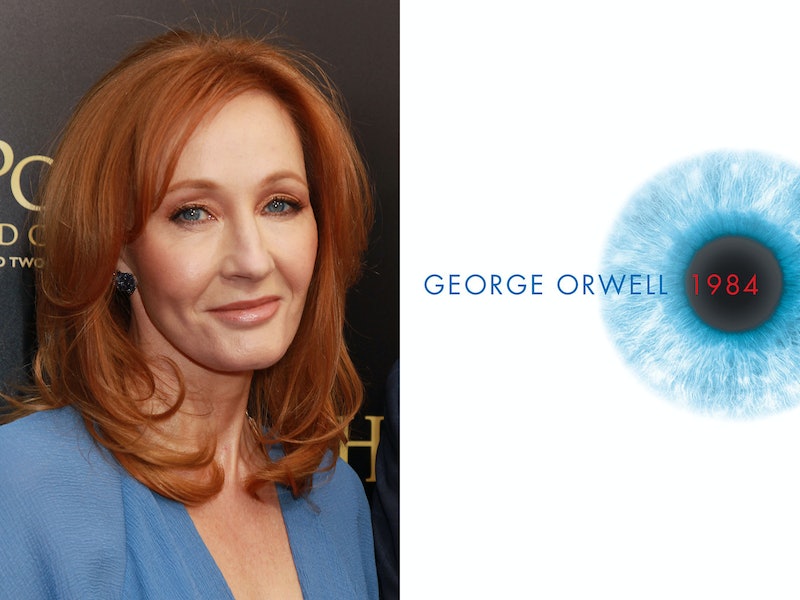 In response to the White House's decision to revoke CNN correspondent Jim Acosta's press pass, J.K. Rowling has taken to Twitter, posting a chilling quote from 1984. The Harry Potter author retweeted a video posted by Sarah Huckabee Sanders, which featured the heated exchange between President Trump and Acosta that has been used as the basis for the revocation, and added her own message, one that puts the White House's attempts at silencing the press on full blast.

The video, from a Nov. 7 press conference, featured Acosta pushing back on Trump's characterization of the migrant caravan as an "invasion." After several moments of charged back-and-forths, Trump angrily stated, "That's enough." A White House intern then tried to grab the mic away from Jim Acosta; Acosta's response — to resist — resulted in what Huckabee Sanders has characterized as physical assault.

"President Trump believes in a free press and expects and welcomes tough questions of him and his Administration," said Huckabee Sanders said in a statement later that night. "We will, however, never tolerate a reporter placing his hands on a young woman just trying to do her job as a White House intern." Acosta's "hard pass" has since been suspended until further notice; he tweeted a video of himself surrendering the pass to the Secret Service on Wednesday night.

Rowling's decision to repost Huckabee Sanders' video, and caption it with the eerie Orwellian quote — "And if all others accepted the lie which the Party imposed — if all records told the same tale — then the lie passed into history and became truth." — hits at a fear Americans are increasingly waking up to.

Originally published in 1949, George Orwell's 1984 chronicles a dystopian future, where critical thinking has been all but crushed by a totalitarian regime (the Party), where the present news and the historical records are re-written by the Ministry of Truth, and where the public is held captive by propaganda, too sated by tabloids and "sex-filled movies" to recognize that their right to free and critical discourse has been stripped away. In the week following President Trump's inauguration, the book immediately became a best-seller in the United States.

The particular quote Rowling chose, which illustrates the Party's influence on the past and present — and subsequently, the future — reference both Trump's characterization of the journey of the migrants as an "invasion," and Huckabee Sanders' depiction of Acosta's interaction with the White House intern as an altercation. And this is hardly the first time in the past year and a half that the truth of a situation has been buried under false narrative. Remember Kellyanne Conway's "alternative facts" moment? Remember Sean Spicer trotting out the claim that Trump's inauguration crowd was the largest ever in attendance?

And while Rowling's choice of quote is already frightening enough, it's the fate of those who fall out of favor with the Party, those labeled "thoughtcriminals," that is perhaps most alarming. The newspapers extolling the truth are thrown into the "memory hole" and burned out of existence. The free thinkers, the thoughtcriminals, the people willing to stand in opposition to the party - they become "unpersons."