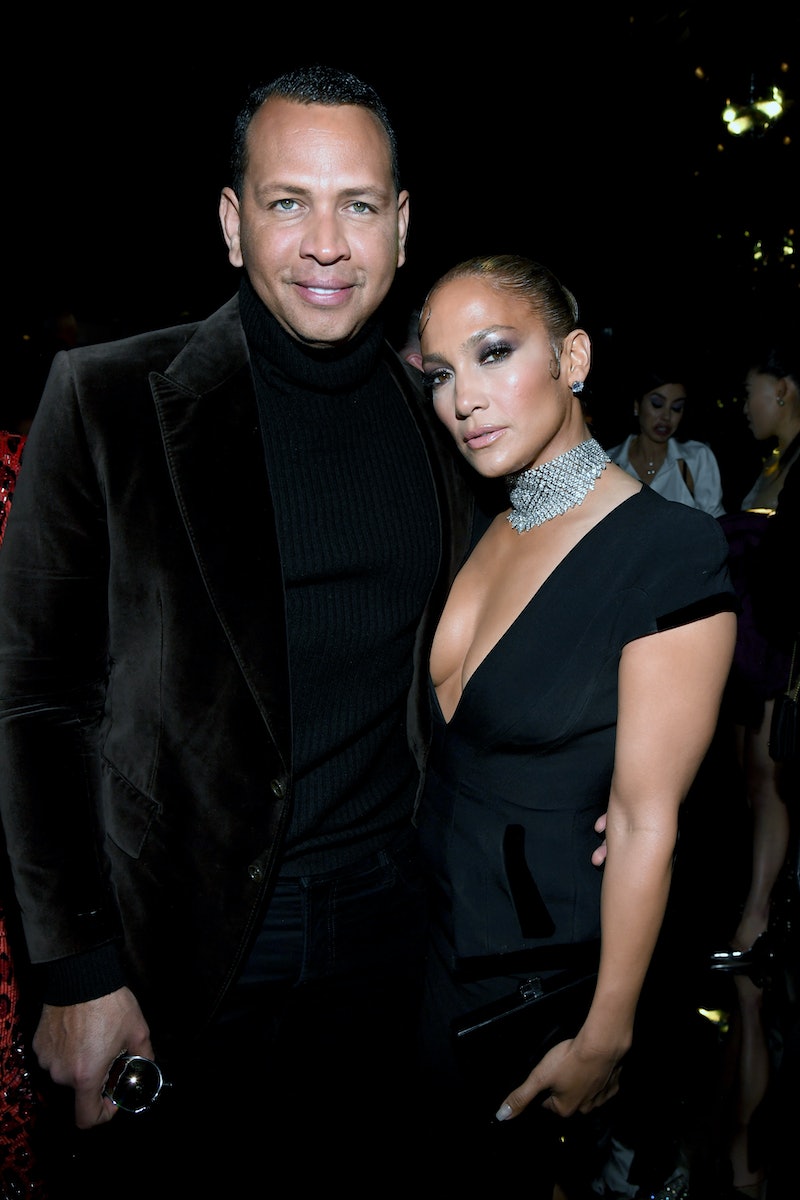 Is there anything Jennifer Lopez and Alex Rodriguez can't do? After conquering the worlds of fashion, sunglasses, and YouTube together, the power couple is now taking over TikTok. And they're already experts at it. J.Lo and A-Rod did the TikTok "Flip the Switch" challenge, and it included a wild costume change that you'll never be able to unsee.

In the clip, A-Rod is decked out in his formal fit of a dark suit and shades and standing in front of their mirror, while J.Lo is rocking a white, backless sweater dress and dancing in the background. True to the viral meme that has taken over TikTok, after the first lyric of Drake's song "Nonstop" plays, the couple swaps places — and outfits. Yes, A-Rod busted out some interesting moves while wearing J.Lo's dress, while Lopez stood stoic in her fiancé's shirt and oversized shades.

A-Rod posted the hilarious video to his TikTok and Instagram accounts, with J-Lo reposting it soon after. "Late night Tiktoks," he captioned the video, tagging his fiancé. She teasingly added "Wait for it..." on her own caption, and frankly, it's more than worth the wait.

Predictably, fans and celebs alike were very enthralled by the couple's creative take on the "Flip the Switch" challenge. As reported by Entertainment Tonight, J.Lo's Second Act co-star Vanessa Hudgens reacted with an accurate "I'M DEAAAAAD," while Lenny Kravitz commented on A-Rod's post with an encouraging "Get it bro!"

Both J.Lo and A-Rod have become very active on the rapidly rising social network, with J.Lo already boasting an impressive 2.6 million followers after joining only a month ago in February. She even created her own TikTok challenge, encouraging fans to recreate the "Love Don't Cost A Thing" choreography from her epic Super Bowl performance and reposting many of the best responses to her own channel.

Of course, this isn't the first time that J.Lo and A-Rod have appeared on each other's TikToks. In fact, the singer recently shouted out her fiancé when she posted a video of her filming A-Rod while he was on TV at the gym, set to the tune of PUBLIC's romantic "Make You Mine." At this point, is your relationship even real if it's not TikTok official?