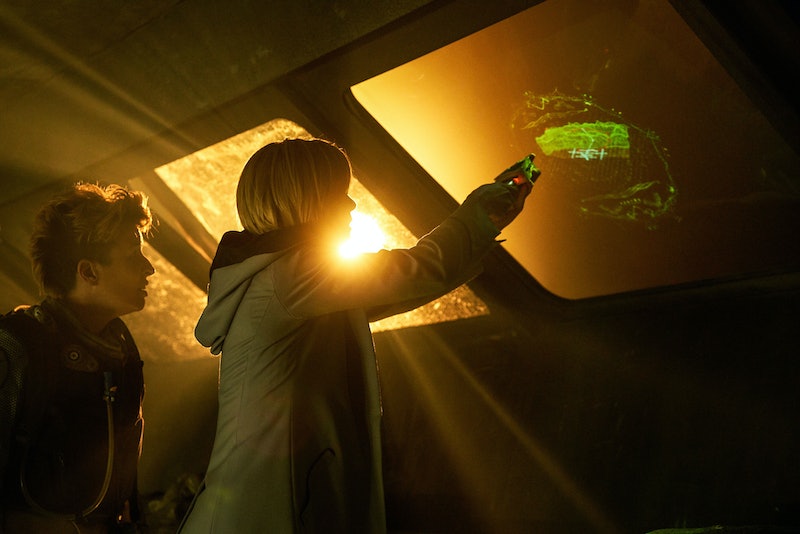 Whovians know that with a brand new Doctor comes a whole host of other things to anticipate: a new outfit, a new attitude, and potentially a new companion (or three). The Thirteenth Doctor fashioned her own new sonic screwdriver in the premiere of the eleventh series, but in the second episode, Jodie Whittaker's Doctor Who Tardis was finally revealed. At the end of "The Ghost Monument," the Doctor, Yaz, Ryan, and Graham (played by Whittaker, Mandip Gill, Tosin Cole, and Bradley Walsh), enter the time-travelling police box at long last — and the renovated interior is something pretty special.

The revamped exterior of the Tardis was revealed back in 2017, as the Radio Times reports, in first-look photographs of the Thirteenth Doctor's outfit. Whittaker's Tardis is a darker, greyish-blue, a pretty drastic change from the bright blue police box captained by Matt Smith and Peter Capaldi's Doctors. As the Radio Times points out, the new paint job bears a similarity to the Christopher Eccleston and David Tennant era Tardis. "Perhaps a statement of intent to take the Tardis back to its noughties days?" the magazine suggests.

Other external changes spied by the Radio Times include the "police telephone" sign, which has been inverted from black text on a white background to white text on a black background. The St John's Ambulance sign on the right door of the Tardis has disappeared, while the lock and the handle have switched places. There's also a few little tweaks to the windows, the lamp, and the panelling on the Tardis doors.

But it's the interior of the Thirteenth Doctor's Tardis which has seen the most drastic changes — as concept artist Darren Fereday promised on Twitter back in August, according to the Radio Times. Fereday tweeted about the first time he learned of production designer Arwel Wyn Jones's plans for the police box, saying, "His vision was crazy. It hasn't stopped."

"I've missed you," says the Thirteenth Doctor when reunited with her Tardis. "You've done yourself up!" She steps inside to discover something drastically different from the former purple-hued interior. The walls look like a collision between a sequence of cogs and a honeycomb, while great pillars of amber (or honey!) stretch from floor to ceiling. The console itself is more rustic than the Twelfth Doctor's, and where the latter was solid metal (or what looked like it), the new version has a hollow brass-like frame over a slab of — again — glowing amber.

The floor, too, is different: where Capaldi's Tardis had a bright silver floor with illuminated vents, Whittaker's looks altogether more organic — almost like magma glowing through the tectonic plates of the Earth's crust. Much like Whittaker's brand new, hand-fashioned sonic screwdriver, her Tardis has a much more earthly feel, as though it was hewn from the throat of a volcano.

Oh, and there's a custard cream dispenser too.

"I really like it," says the Doctor in awe, as she's followed into her brand new Tardis by Yaz, Ryan, and Graham. I do too, Doctor!