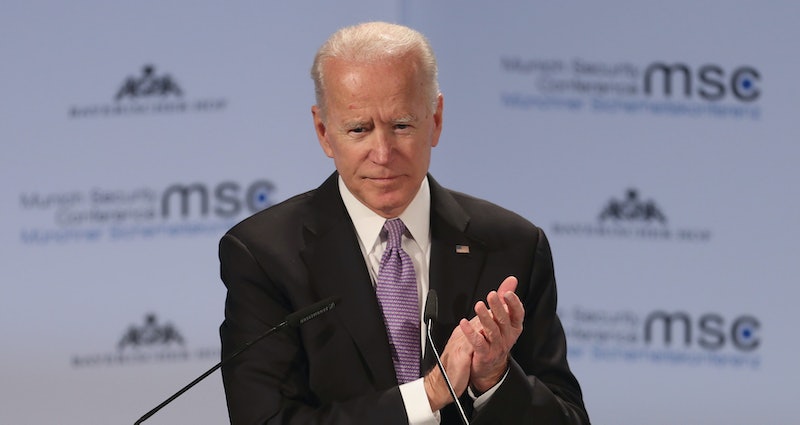 Many Democrats who were expected to run for president in 2020 have already announced their campaigns. One key figure, however, has not. Speaking in Germany on Saturday, former Vice President Joe Biden addressed 2020 presidential run rumors.

"I haven't reached a decision," Biden said at a Munich Security Council meeting, per a video tweeted by The Hill. "I'm in the process of doing that, and I will in the near-term let everyone what that decision is."

"I think there is a sufficient amount of time to do that, and I think that we have a tendency — particularly in the States — to start the whole election process much too early," Biden said. "I think we should be focusing now on what needs to be done to alter some of the policies being that are being promoted by the president."

After the 2016 presidential election, Biden appeared entirely unsure about whether or not he would run in 2020. At times, he appeared to suggest that he would likely make a bid for the Democratic nomination; at other times, he flatly denied that he had any intention to do so, at all. But the narrative that has emerged in the last several months or so has been a bit more nuanced. Repeatedly, Biden has said that, at the end of the day, he isn't entirely sure. But he has said he is definitely thinking about it.

Indeed, the public has been waiting for an announcement, affirmative or otherwise, for quite some time. Since at least spring of 2018, Biden has said he would release a decision in the near future. At one point, he said that he would make up his mind before the turn of the new year. However, the near-future, as well as the start of the new year, has come and gone, and the former VP has not shared whether he will make a run.

"It takes time to come back," Biden said in an interview with Rev. Al Sharpton on MSNBC's PoliticsNow last April. "Look, no man has a right to go say, 'Help me become president,' unless I can look at you and say, 'You’ve got my whole heart, my whole soul, all of my passion, all my attention.' And I know I got to make that decision by, you know, by the end of this year."

The field of Democratic presidential hopefuls is already quite busy. It includes: Sens. Amy Klobuchar, Elizabeth Warren, Kirsten Gillibrand, Cory Booker, Kamala Harris, Rep. Tulsi Gabbard, as well as former Secretary of Housing and Urban Development Julián Castro and South Bend Mayor Pete Buttigieg. If Biden were to step in the ring, he would be among many other high-profile Democrats.