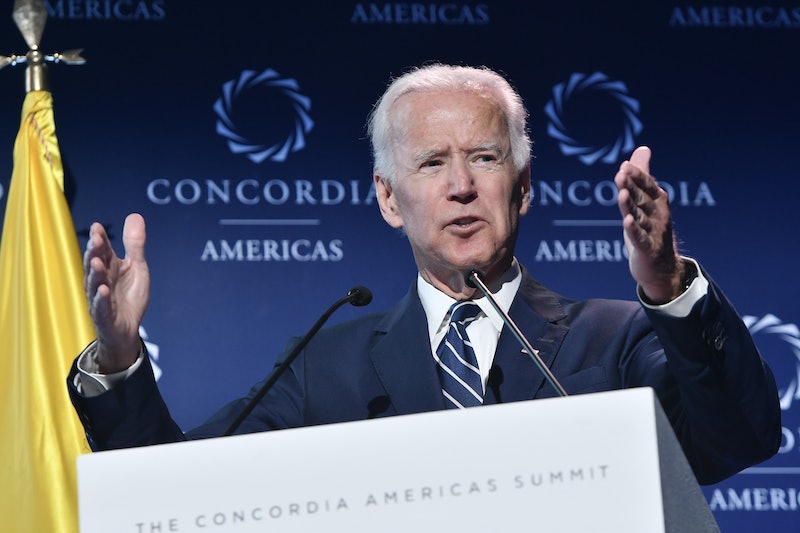 Speaking to the country's largest Latinx civic rights organization, former Vice President Joe Biden criticized family separations at the border as "one of the darkest moments in our history" on Friday night. Biden also called out the zero-tolerance policy that led to families being separated, saying it's an "all-out assault on human dignity."

"Grotesque lies, lies about immigrants, about crime, about costs to the community. They’re simply lies. Factually inaccurate," Biden told members at The League of United Latin American Citizens in Phoenix, according to NBC News. "And look folks, this administration’s policies that literally rip babies from the arms of their mothers and fathers: one of the darkest moments in our history."

Biden said he noticed the declining reputation of the U.S. during recent trips to Europe and South America. He broadened his critique of the Trump administration. "Not only are they a national shame, they tarnish the very idea of America and diminish our standing in the world," Biden told the crowd of more than a thousand people, according to ABC News.

By Friday, CNN reported that the Trump administration reunited at least 450 children separated from their families at the border. (The separated children were aged 5 or older.) However, there are still about 1,900 who still need to be reunited with their family by the deadline next week, according to CNN.

Biden said it wasn't just the family separation policy that was tarnishing the nation's reputation. "It doesn't just reveal itself in the betrayal of the Dreamers or the pardoning of a sheriff who has terrorized the community," Biden told the crowd, according to NBC News. The sheriff in question was Joe Arpaio, who President Trump pardoned in August 2017. "It is also in the underfunding of our schools, and the attacks on labor, and the ability of workers to bargain for their own worth."

Biden encouraged attendees to treat each other with dignity. "I was raised by a man, my father, who believed with every fiber in his being that everyone — everyone — deserves to be treated with dignity," the former senator and vice president said. "We're in the midst of an all-out assault on human dignity. Yes, at the border, but also in the courtroom, in the classroom and on the factory floor."

Biden's criticism comes on the heels of President Trump expressing his delight in rumors that the former vice president might seek the Democratic nomination in 2020.

"I dream about Biden," Trump told CBS News' Jeff Glor. "That's a dream. Look, Joe Biden ran three times. He never got more than 1 percent. And President Obama took him out of the garbage heap and everybody was shocked that he did."

Biden has not ruled out running in 2020, according to an interview with MSNBC's Al Sharpton. "I know I have to make the decision by the end of the year," Biden said. In July, he said a decision had to be made by January during a forum in Bogota, Colombia.