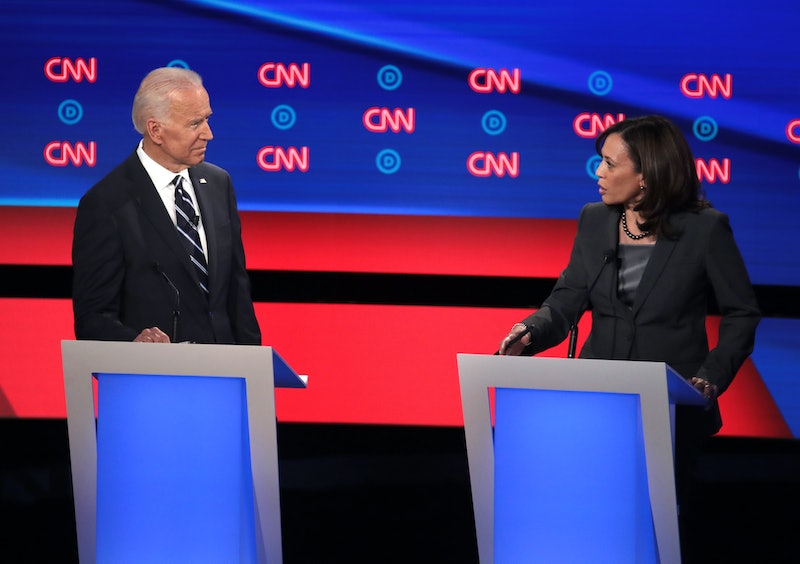 Sen. Kamala Harris and former Vice President Joe Biden came to the debate stage Wednesday night with their gloves off. The two went head-to-head on issues including health care, their records on busing, the Hyde Amendment, and more. The fireworks weren't only present in their words: Harris' and Biden's body language during the Democratic debate showed they were ready for a fight, according to experts.

From the very first question of the debate, which was about the candidates' health care plans, body language expert and author Lillian Glass tells Bustle "there's such hostility here."

"It's kind of like they've memorized some facts and it's like they're talking at each other, not to each other," she says. That dynamic — that the two were having their own personal debate on a stage that happened to feature eight other candidates — continued throughout the night, Glass and Patti Wood, a nonverbal communication and human behavior researcher, tell Bustle.

The stage was well-set for tension between the two. At the last debate in June, Harris made Biden's lack of support for busing policies personal, sharing a story about how she was bused to school herself when she was a child as part of desegregation efforts. Then, two days before they faced off this week, Biden's campaign released a statement criticizing Harris' health care plan, describing "a refusal to be straight with the American middle class, who would have a large tax increase forced on them with this plan."

Once Biden and Harris finally took the stage Wednesday night, these body language experts say that it was clear just from their initial handshake that a clash was imminent. Here's what Glass and Wood say the candidates' body language revealed during three key debate moments.

"That handshake tells you everything," Glass says, describing Harris' hand when she puts it on Biden's arm as "kind of cupped in anger." Biden, on the other hand, reads as open-mouthed and friendly to Glass.

"She's keeping her distance and she's leaning back from him," Glass says. "So she has no intention of being kind. She has a tight-lipped smile and it's very, very hostile."

Wood doesn't have the same take. She says that when Biden first walks on stage, his body leans forward and he does a "little kind of skip movement that wasn't natural to him to create some energy." She also draws attention to a downward smile that Biden makes.

"If you'll look at how that affects his entire face, it's in downward mode and he's holding his lips tightly shut," Wood says. "That is what I call a masking smile. ... So this tells me he's going into this — that in combination with how small his eyes are, he doesn't think he's going to win."

Wood notes that Biden first makes Harris come to him, and then holds her right hand between his two hands and pulls it close to his body.

"That's a power move," she says. "It's very common in these debates to have some sort of power move, and in this one he's doing what's called the not-letting-go handshake."

Harris responds by putting her hand on Biden's arm with her fingers spread out, which is similar to a technique Wood says she uses to deal with the "not-letting-go handshake."

A Squabble On Health Care

From the start of Biden and Harris' exchange on their respective health care plans, Glass says the hostility is apparent, highlighting Harris' finger-pointing at Biden.

"We haven't seen a candidate get that angry in such a close proximity, and he basically ignores her, he doesn't acknowledge her when she's being very hostile like that," she says. "It was a very awkward exchange."

Wood says Harris does have a distinct paralanguage, which is the nuances of the voice and breathing. "She speaks with anger, but it's specifically a controlled anger. It doesn't rage out," she says. "The voice stays within a particular range. As she's doing it, there's not big highs and lows."

She also notes that during the health care exchange, Harris has a pen in her hand, which is an effective symbolic weapon. "Symbolically, at the limbic brain level, the audience is seeing her stab his ideas or stab downwards at his ideas," Wood says, adding that Biden looked her in the eyes as she spoke, indicating he took on her challenge.

Toward the end of the exchange, Wood points to a shift in Harris' voice, which "is just strong... there's not the anger in it."

"But there's conviction, and at that point he stops making eye contact with her," she says. "She won that round."

A Challenge On The Hyde Amendment

Glass notes that as Harris attacks Biden for his previous support for the Hyde Amendment, which prohibits the use of federal funds to pay for abortions except in cases of rape, incest, or a threat to a pregnant person's life, he sometimes turns away from her to give her the cold shoulder.

"To the public watching this, he's responded well, he's not attacked back," she says.

Wood points out that Biden and Harris are standing close to each other in the exchange and are "addressing each other personally." But at one point, she notes Biden turns his body to his right "to ensure that he doesn't engage her."

"To me, it's not quite as brave, because he's not straightforward and he's not engaging her," she says.

After that, Harris appears angry to Wood, who says she brings her arms out on the podium "so that she has a little bit more power." Harris also scratches her head with her pen at some point, which indicates to Wood that she doesn't agree with Biden. Her elbow is also out, which Wood describes as "a hit at what he's saying."

The exchange could be viewed two ways, according to Wood: Viewers who prefer a "rule of order will say she overtalked him and was rude and angry." But Wood says viewers who see the debate as a battle will likely feel that Harris won that point.

Glass agrees to an extent. She says most viewers will be turned off by Harris, while Biden will come off as a stronger leader to people who prefer his measured responses. Regardless of how people feel about the their debate performances, Harris and Biden's body language made it clear they didn't walk out on that stage to be friendly.