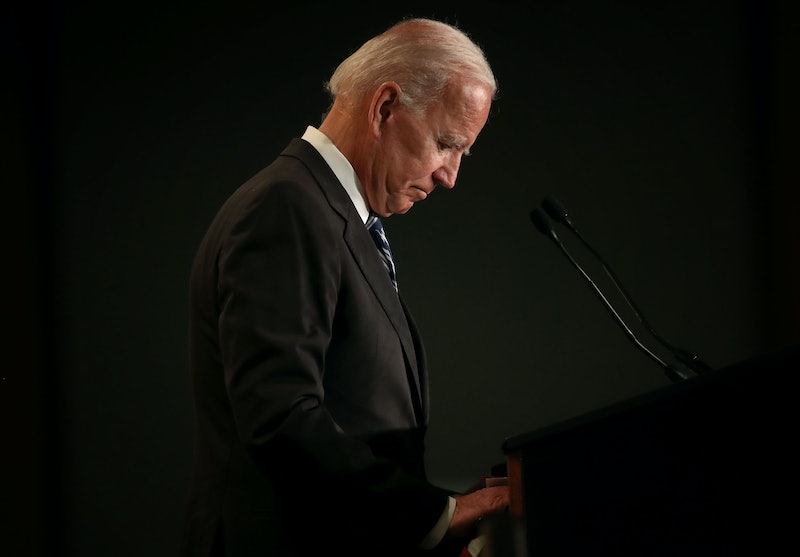 A former vice president and possible 2020 contender is speaking out about why he should've handled a pivotal moment in his career differently. Joe Biden said he regrets not giving Anita Hill the "hearing she deserved" in 1991, when she provided testimony to the Senate Judiciary Committee detailing allegations of sexual harassment against then-Supreme Court nominee Clarence Thomas. Thomas has always denied these allegations.

Biden was the chairman of the committee at that time, which was widely criticized for its aggressive questioning of Hill, CNN reported. He commented on the hearing during a speech he gave on Tuesday at an event recognizing students who work to stop sexual assault on college campuses, the New York Times reported. When discussing Hill's testimony, Biden asserted:

She faced a committee that didn’t fully understand what the hell this was all about. To this day, I regret I couldn’t give her the kind of hearing she deserved ... I wish I could have done something.

This isn't the first time Biden has spoken on the matter. Back in September 2018, Biden apologized to Hill during an interview on the Today show, and simultaneously defended himself. “I’m sorry I couldn’t have stopped the kind of attacks that came to you," Biden said on the show. "But I never attacked her, I supported her. I believed her from the beginning.”

Biden also echoed similar sentiments at the Glamour Women of the Year Summit in November 2017, saying, per Glamour, "I’m so sorry that she had to go through what she went through ... Think of the courage it took for her to come forward. [S]he got put through hell during [the testimony]." Hill commented on Biden's remarks at the Summit during an interview with the Washington Post in November 2017. When asked if she accepted Biden's public apology, she told the paper:

Some part of it. But I still don’t think it takes ownership of his role in what happened. And he [Biden] also doesn’t understand that it wasn’t just that I felt it was not fair. It was that women were looking to the Senate Judiciary Committee and his leadership to really open the way to have these kinds of hearings.

According to The Wrap, Hill has also emphasized that, while Biden has apologized publicly for his handling of the hearing, he hasn't apologized directly to her — though she's not waiting for an apology.

"He said he apologized, but he hasn’t apologized to me,” Hill said during a November 2018 event at the University of Southern California (USC) Dornsife, per The Wrap. "The statute of limitations has run on an apology. I don’t need an apology ... But sometimes when the doorbell rings, and I am not expecting anyone, I think, could that be Joe Biden?”

Overall, Biden certainly seems to lament how he handled Hill's testimony, though it's clear that some, including Hill, think he could've done more — both now and in the past — to stand in solidarity with Hill.