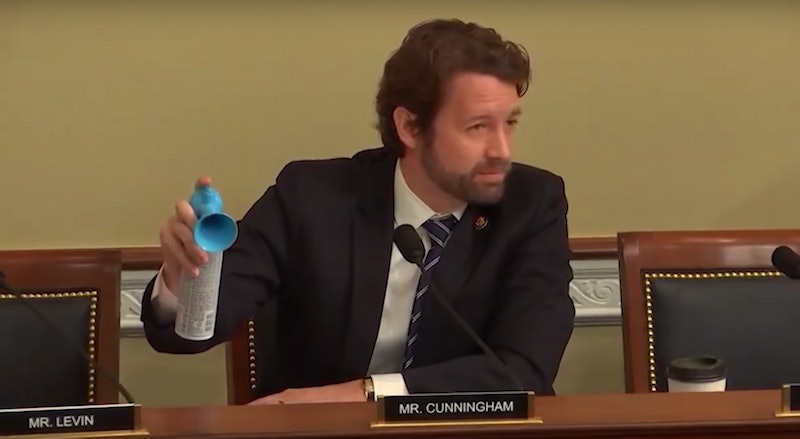 During a House Natural Resources subcommittee hearing this week, South Carolina Rep. Joe Cunningham blasted an air horn to prove that seismic air gun testing can be "disruptive" for marine animals. During the Thursday hearing, a Trump administration official — Chris Oliver — testified that repeatedly firing commercial air guns under water to detect oil and gas deposits would not hurt endangered marine species. That's when Cunningham pulled out his air horn, according to video footage from the hearing.

"Was that disruptive, Mr. Oliver?" Cunningham asked after blowing the horn.

"Sir, it was irritating, but I didn't find it particularly disruptive," Oliver responded.

Other lawmakers present at the hearing engaged in a typical partisan debate, The Washington Post reported, with Republicans in favor of seismic air gun testing and Democrats opposed to it. Cunningham, a Democrat, took the debate to the next level. He continued to grill Oliver, who currently serves as the assistant administrator for National Oceanic and Atmospheric Administration (NOAA) Fisheries.

Cunningham asked Oliver whether he would consider such a sound "disruptive" if it was repeated every 10 seconds — which, according to The Washington Post, is how often seismic air guns are blasted under water. Oliver replied that if he were close to the source of the sound, he would "probably" find it disruptive.

"What if you depended on sound for hunting your food and for communication?" Cunningham asked, referring to whales' hunting patterns. "Do you think it would be disruptive?"

Oliver again responded that he would find the sound disruptive at a distance of 20 feet, at which point Cunningham asked Oliver to guess how much louder seismic air guns are than the air horn he blasted at the hearing. Oliver refused to guess, and after several attempts to get a reply, Cunningham informed Oliver that seismic air guns are "16,000 times louder than what you just heard here."

“Do you see how that would be impactful on marine species and mammals?” Cunningham asked Oliver, per The Hill.

“I do,” Oliver replied, “which is why we put mitigation measures in to minimize the proximity of that activity.”

According to The Washington Post, the NOAA gave five companies temporary permits last year to carry out these tests. In December, a coalition of environmental groups filed a lawsuit against the Trump administration to protest these permits. Diane Hoskins, campaign director of the nonprofit group Oceana — one of the groups filing the lawsuit — told The Washington Post that issuing seismic gun testing permits "can harm everything from tiny zooplankton and fish to dolphins and whales."

Kristen Monsell, the Center for Biological Diversity's ocean program legal director, seconded this point, telling The Washington Post that "right whales will keep spiraling toward extinction" if the seismic gun tests were allowed to continue.

“The Trump administration is letting the oil industry launch a brutal sonic assault on North Atlantic right whales and other marine life,” Monsell told the Post.

Cunningham represents Charleston and other coastal cities, the majority of which — according to Hoskins — are opposed to seismic blasting. And Cunningham is not alone; governors along the East Coast have voiced their opposition to the Trump administration's actions, per The Hill, and they have the support of state legislators and attorneys general.