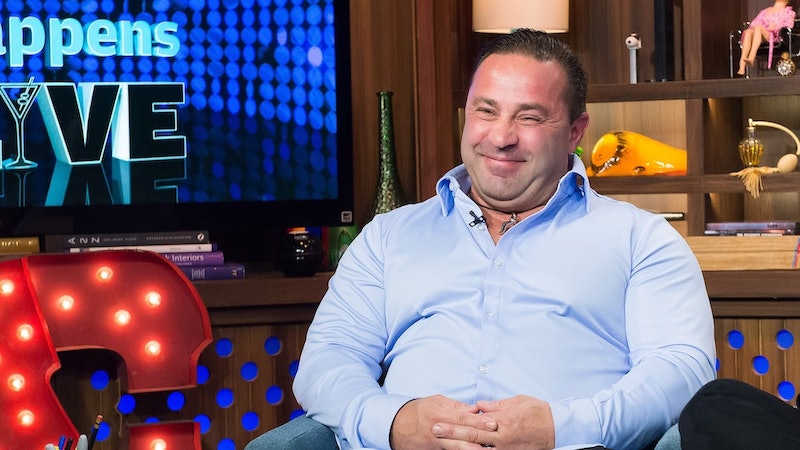 In a new social media post, Real Housewives of New Jersey star Joe Giudice’s daughter shared the first photo of him in three years and revealed that she’ll see her dad soon. Gia Giudice, the eldest daughter of RHONJ's Joe Giudice and Teresa Giudice, took to Instagram Story on Saturday, Oct. 12 to share a FaceTime screenshot with her dad, who was released from prison in March after serving 41 months for fraud. Giudice was placed in ICE custody after his release, but recently opted to return to his homeland of Italy on Friday, Oct. 11 to await the news of his deportation status, according to E! News.

Gia shared screenshots of FaceTime sessions with her dad on her Instagram Story on Oct. 12. “One of the happiest moments of my life!" she wrote in the first picture of Joe as he was all smiles. "Love you so much daddy, so happy your free! See you so soon.” In a second screenshot that also included her sister Gabriella, Gia wrote, "I still can't get over this I love you more than words can describe."

Gia, as well as her three sisters and mom Teresa, are expected to visit Joe soon in Italy, according to Us Weekly. “Teresa already has a trip to Italy planned,” the source said in an Oct. 11 report. “It’s fast approaching.” On Instagram on Oct. 13, Gia shared a photo of her dad reunited with his brother Pete in his homeland. She wrote in the caption "see you in a few weeks daddy."

Joe entered prison for conspiracy and bankruptcy fraud in March 2016. A judge ruled in October 2018 that the reality star would be deported back to his homeland of Italy at the end of his prison sentence. While he has lived in America since he was a child, he reportedly never obtained citizenship, according to a PEOPLE report. Joe filed an appeal against the deportation in November 2018, but it was ultimately denied in April of this year.

“We are extremely disappointed that the Board of Immigration Appeals has denied Mr. Giudice’s appeal,” James J. Leonard Jr., the Giudices' attorney, told PEOPLE in a statement in April. “We have filed a stay with the Third Circuit Court of Appeals and will continue to fight to keep Mr. Giudice in the United States, the only country he knows, and reunite him with his wife and four daughters.”

On the heels of Joe’s return to his homeland on Friday, Oct. 11, Leonard Jr. told TMZ that Joe was able to speak to his wife and children prior to his trip to Italy. “Teresa is very happy and got very emotional after speaking to Joe today. He called both her and Gia from the plane. It's bittersweet, everyone is happy he is out but no one is happy he is going to Italy. He belongs with his wife and four daughters." He continued, "This is a man who loves his family and is not done fighting by any means. He wants to come home."