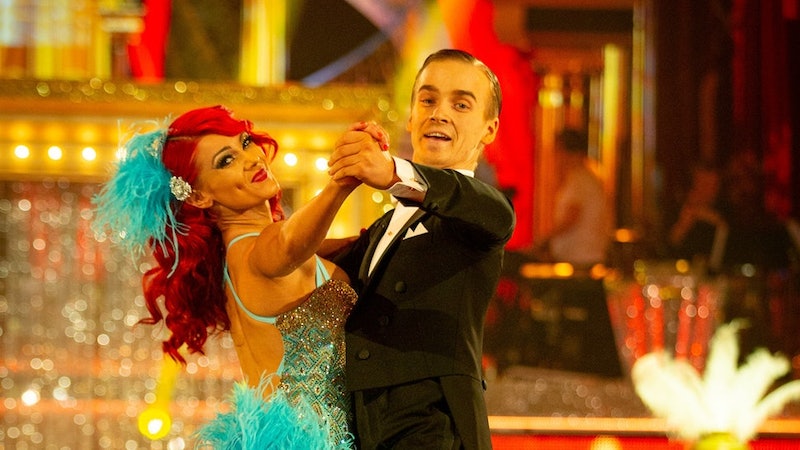 Even the best Strictly partnerships aren't immune to a tumble, it would appear: Joe Sugg dropped Dianne Buswell during the Strictly Come Dancing live tour, and the footage quickly made it onto social media. (In fact, it's the second time the pair have hit the floor on the tour, during the same routine.) As the Huffington Post reports, the latest mishap occurred at London's O2 Arena on February 9, the second last day of the tour. Thankfully, it looks like Buswell's absolutely fine — and she's got a cracking sense of humour about the whole affair.

Sugg and Buswell, who made it to the show's final in December, were performing their show dance to the Arctic Monkeys' "I Bet You Look Good on the Dancefloor" when things went a little bit awry. The routine, as you'll recall from the TV series, features a series of ambitious lifts, which is exactly where the difficulty set in. Attempting to pull Buswell over his shoulders by her legs, Sugg lost his grip, and his pro partner hit the floor shoulders-first. After the fall, Sugg helped Buswell to her feet, and the pair made a hasty offstage exit. Naturally, a multitude of fans were recording the routine from the audience, and promptly posted the dramatic moment on Twitter.

But Buswell's not one to hold a grudge, it would seem. After the incident, she posted on Twitter, "Had to happen at the O2," before reassuring her followers that she was uninjured and ready for the second performance of the day.

The routine's a bit of an unlucky one for the couple, who revealed they were dating after the Strictly Come Dancing final in December. As Digital Spy reports, Sugg tripped during the show dance back in January, when the tour stopped in Birmingham — and proceeded to pull Buswell down with him. Both swiftly recovered and carried on with the performance, however, and Sugg made light of the incident on Twitter.

Tonight sees the Strictly Come Dancing 2019 tour draw to a close, with one last performance at London's O2 Arena. Both Sugg and Buswell are getting a little emotional about finally bidding farewell to Strictly, if their social media posts are anything to go by. On Twitter, Sugg wrote, "It’s been the most special 6 weeks prepping & taking this show on the road with so many amazing people," adding, "And getting to share these memories with my girlfriend [Buswell] has been the cherry on top of the cake."

Buswell shared a similar sentiment: she tweeted, "It has been the most memorable tour yet and not just because we fell over loads of times," continuing, "I’m so lucky to work with such a great lot of people especially my main man [Sugg]." And on Instagram, she directed a sweet message to her partner, writing, "you should be so so proud of yourself because I’m the proudest dance teacher ever."

What's more, this isn't the end of Sugg's dance career, at least not if Buswell has her way: she finished the post, "I promise to still give you an hour ballroom lesson a week." Tumbles or no, does a sweeter Strictly couple exist?