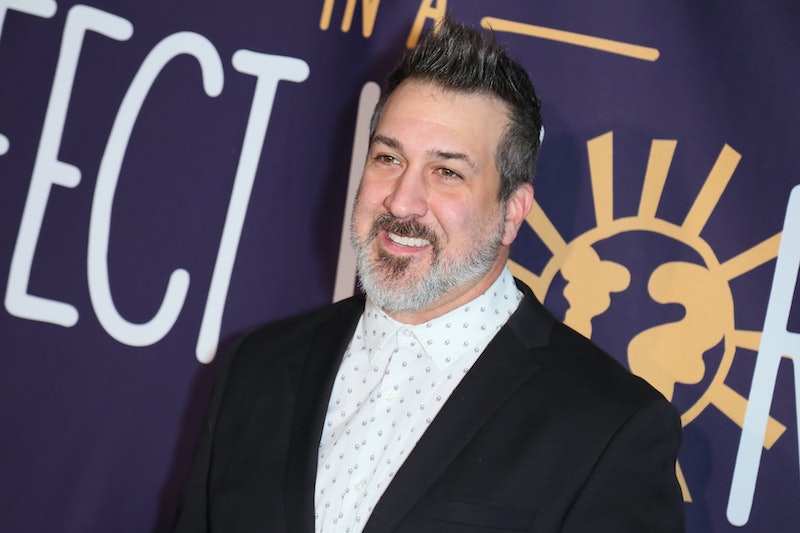 This singer had the time of his life performing on Fox's first season of The Masked Singer and he wants the world to know it. Joey Fatone got a Masked Singer Rabbit tattoo, proving his experience on the show was one he'll never forget (and certainly one he doesn't want to). The former *NSYNC member shared his new ink with fans on Instagram, and is even planting the seed to be involved in the show's upcoming second season because it's just way too good to let go of.

On Sunday, the 42-year-old posted a selfie of himself lying down in the tattoo chair with the caption, "It’s that time again !! Woo hoo tattoo !!! Any guesses ?" After getting a ton of comments guessing that Fatone had gotten a tattoo of The Rabbit, his character on the singing competition series, he revealed the body art the next day. The Instagram photo is a side-by-side look at Fatone's Rabbit performing on stage next to his tattoo, which is an uncanny replica of the costume. The ink includes intricacies from the Rabbit's costume with buckles around it to details in its mask ears. In the caption, he gave a shoutout to tattoo artist Zoey Taylor saying she "did a KILLER job on the rabbit !" Doesn't seem like this is a tattoo Fatone will be regretting any time soon.

In late February, Fatone was eliminated from the show in a semifinals episode after performing a rendition of The Temptations’ “My Girl.” The night of the finale on Feb. 27, Fatone posted a mirror selfie of himself in costume, writing, "Crazy how fast the season has gone by and it’s the finale tonight . Great job @maskedsingerfox . In honor of it here is me in the rabbit outfit waiting to go on ! 🐰🐰🐰🐰🐰🐰🐰. long live the Rabbit ! #judgenextseason #maskedsinger #sweatmyassoff." Thanks to his new tattoo, the Rabbit certainly will live on. Fatone also posted a photo of his masked on-stage persona captioned, "Ah memories !"

He clearly loved being a part of the show as much as fans loved tuning in. As he's hinted by using #judgenextseason, Fatone has expressed interest in remaining part of the series whether as a full-time judge or guest judge. "[What if] I'm a judge on it," he teased about next season to Entertainment Tonight on Monday. "That'd be fun, because now I have an inside view… So we'll see."

Now that he's well-seasoned from Season 1, Fatone would have no problem getting back in the saddle as a judge. And this time, he wouldn't have to hide. On Feb. 20, Fatone shared a photo of himself covered head-to-toe in a mask and hoodie draped over his costume while on his way to the set. "Just to give you a behind the scenes look at what I had to do and so did anyone who came with me !" he wrote. He may have shed the costume, but Fatone will always be one with The Rabbit.