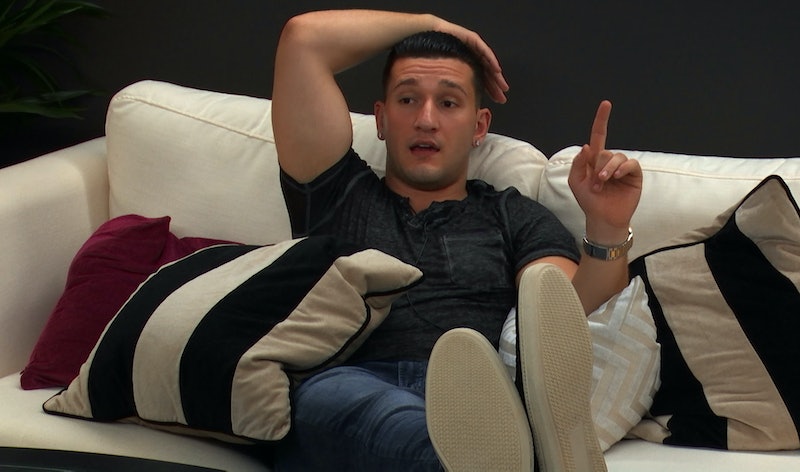 There may not be anyone loving life after The Circle more than Joey Sasso. Not only did he win the first season of the Netflix competition show (and its hefty $100,000 prize), but judging by his Instagram, he's clearly been enjoying his time in the spotlight — and his new meme status. As he told Wired in a recent interview: "Every single person judged me in the beginning, thinking I'm this douchebag Jersey Shore wannabe type of person, and then they got to see who I really am ... I get that I'm a character, and I love that people are having fun with it."

In the same interview, Joey said that he's been on social media for 12 to 15 hours every day responding to fans. "I feel a responsibility to let these people know that I hear them, that they're not silent, and that they are awesome just the way that they are," he said. "How do you sit there and not start crying? I'm calling my mom and telling her about all these messages that I'm getting and we're both the same type of person, so she'll be crying too."

If you, like the rest of the world, can't seem to get enough of Bro-y Joey, here's what else you can learn from his Instagram.

He & Miranda Seem To Just Be Friends

"[Miranda] is someone I love dearly," Joey told Entertainment Tonight. "I have the most amazing relationship with her. She's unlike anybody I've ever met in the best way. We are most definitely in each other's lives, and I'm thankful for this experience for bringing us together and being friends."

His Bromance With Shubham Is Still Going Strong

Joey has dedicated a number of Instagram posts to his fellow contestants, including Sammie (after she won the Fan Favorite award) and Shooby. "People have been shocked about our friendship, but [Shubham is] the type of person I would actually be friends with in real life," Joey told Vulture. "I could tell from day one that this kid was special.... He's someone I would do absolutely anything for. I adore that kid."

The Sasso Family Is Very Supportive

It was clear from the show that Joey is very close with his family, and his Instagram is only further proof. Not only did his cousins send him a congratulatory video for his big win, but before The Circle began airing, Joey posted a video of his aunt buying him enough cleaning supplies for what he theorized would last "10 freakin' years." "It's a Sasso trait!" his aunt responded proudly.

In actuality, however, the cryptic post was a promotion for The Circle, for which they'd used Joey's February 2018 Instagram selfie. So when Joey announced that he was on the Netflix show, he also came clean about the selfie. "For all of you asking, yes that's me on @netflix#twitter account," he wrote, in part, on Instagram. "My phone has been BLOWING UP the last hour hahaha."

Of Course He Posted *That* Selfie

The Circle fans know that Joey met Adele and Lady Gaga, because he shared the photo during one of the show's challenges. If you scroll back to February 2019, you can see the iconic selfie along with two videos of Gaga dancing to a "Shallow" remix. Joey explained in the aforementioned Vulture interview that the photo had come about while he was bartending at Mark Ronson's Grammy after-party. "I was serving Adele and then Gaga, so I leave the bar, walk up to Gaga, whisper in her ear — 'cause she's Italian from New Jersey — and I go, 'Stefani, do I really have to call you Gaga or not? Or can I call you Stefani?' She calls me 'Sassy Sasso,' and she takes my chin, and she's like, 'All these MFers gotta call me Gaga. You can call me Stefani.'"

If that's the kind of life Joey was living before The Circle, you can only imagine what's to come.