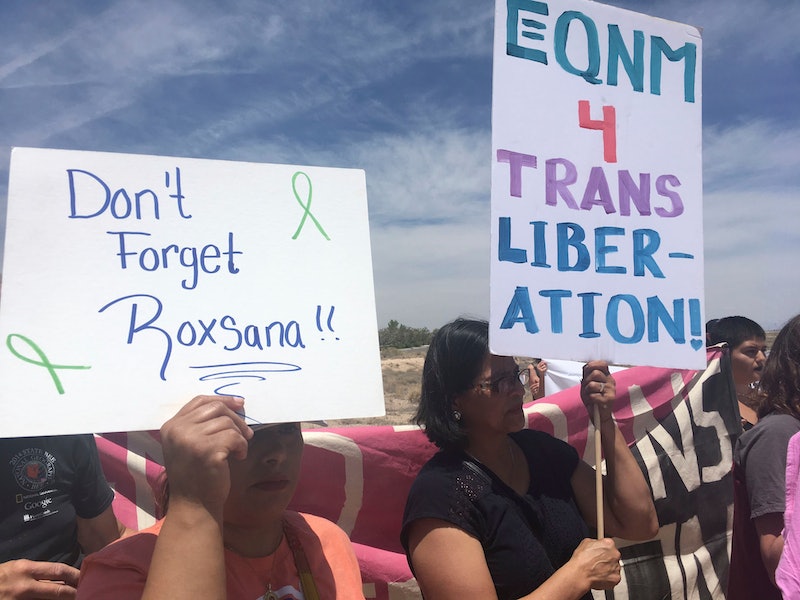 After spending six weeks in detention, a transgender woman who was seeking asylum died on the first day of Pride month, Immigration and Customs Enforcement (ICE) has confirmed. Johana Medina Leon died on Saturday at a hospital in El Paso, Texas, according to the agency. ICE says Medina Leon had been released on parole from Otero County Processing Center — the same facility that has been accused of mistreatment of gay and trans migrants — on Thursday, as she was taken to the hospital.

What ICE Is Saying

The 25-year-old arrived in the United States from El Salvador on April 11 at the Paso Del Norte Port of Entry and entered ICE custody on April 14, the agency says in a statement. Medina Leon passed her credible fear interview, which determined she did have a potential asylum claim, on May 18, according to ICE's chronology. Then she requested an HIV test last Thursday, which came back positive; the agency says that's the same day she complained of chest pain and was taken to the hospital.

"This is yet another unfortunate example of an alien who enters the United States with an untreated, unscreened medical condition," Corey A. Price, field office director for ICE Enforcement and Removal Operations in El Paso, says in the statement. "There is a crisis at our southern border with a mass influx of aliens lured by the lies of human smugglers who profit without regard for human life or well-being. Many of these aliens attempt to enter the United States with untreated or unknown diseases, which are not diagnosed until they are examined while in detention."

What Transgender Activists Are Saying

Transgender activists are taking issue with ICE's version of events, firmly placing blame for Medina Leon's death on the agency. "We regret to inform the community that ICE has taken one more of our sisters," a Facebook post from the LGBTQ migrant advocacy group Diversidad Sin Fronteras reads.

In another post, the group criticizes the official ICE statement on Medina Leon's death.

"She presented legally, she traveled with her best friend, another trans woman, she was not 'smuggled,'" the post reads. "Has Corey A. Price even researched the case before commenting?" ICE did not respond to comment beyond providing the prepared statement.

Grecia, a trans leader from the group Casa Migrante in Juarez, Mexico, also put out a statement following Medina Leon's death that emphasized how long the asylum seeker had spent in detention. "For weeks she pleaded for medical help, referring to her continous [sic] health problems," Grecia said in the statement.

"This morning I went to visit her at the hospital intensive care unit," Grecia added, as quoted by the Post. "When I looked at her I said that what happened a year ago to Roxana in the month of May could happen to JOA right in there. And it did."

The "Roxana" Grecia refers to is Roxsana Hernandez, the last known transgender migrant to die after ICE detention. Hernandez died in May 2018, after just 16 days being held by the agency. An independent autopsy done at the behest of Transgender Law Center was released in November; it showed Hernandez died from dehydration and complications from HIV, but also that she had suffered abuse before her death and was beaten, according to The New York Times. ICE denied Hernandez was abused.

Reports Of Abuse At The Facility Where Medina Leon Was Held

The facility where Medina Leon was being held, Otero County Processing Center in Chaparral, New Mexico, has had its own accusations of abuse, as reported by The Daily Beast. The ACLU of New Mexico wrote a letter outlining the accusations to the facility, as well as ICE officials, the Department of Homeland Security’s acting inspector general, and Office of Civil Rights and Civil Liberties.

The letter compiled experiences from 12 gay and trans migrants. "During the three months I was detained in Otero, I was repeatedly groped while I slept, asked to perform sexual favors in exchange for food, and verbally insulted by other detainees," one migrant, a gay man, said in the letter, according to The Daily Beast. "When I complained, I was thrown into solitary confinement for five days and threatened with further punishment if I complained again. Now that I am released from custody, I am free to speak up because I do not fear retaliation."

"This is not a new problem," Nicolas Palazzo, an attorney for Las Americas Immigrant Advocacy Center in El Paso, Texas, told The Washington Post when the letter outlining the alleged abuse was first reported in March. "Sadly, from our conversations with the detainees in Otero, we’ve learned that this level of unlawful abuse, mistreatment and harassment is more widespread and common than we had imagined."

The death of Medina Leon brings fresh scrutiny toward the U.S. government's treatment of LGBTQ, and particularly trans, migrants. On top of that, another Salvadoran migrant — a 33-year-old man — died following "an apparent seizure" shortly after being picked up at the border Sunday, Customs and Border Patrol told CNN.