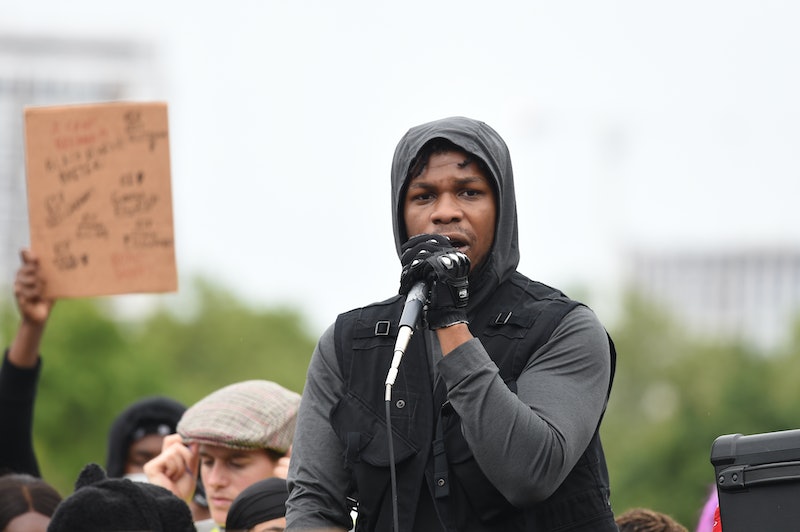 He may be best known for wielding a lightsaber and fighting against the First Order in a Galaxy Far, Far Away, but in real life John Boyega is proving to be just as much of a hero as his Star Wars counterpart. In the wake of the Black Lives Matter protests currently sweeping the globe, John Boyega delivered a powerful message to Black Americans while protesting in London via Instagram Live. And he wants them to know that he stands beside them in the fight against racial injustice.

"My brothers and sisters in America, listen. We love you. We with you. We love you," the actor is seen saying in the video, which was reposted by fans on Twitter, while walking alongside his fellow protesters. "You're not alone. You've given us so much opportunity. You man, have done so much for the world and so much for the culture and that's why we're here. That's why we're here. You're not alone. You will never be alone."

Boyega's powerful message didn't just end there, though. During Wednesday's protest in Hyde Park, he addressed the crowd and incited a call to action. “Black lives have always mattered. We have always been important. We have always meant something. We have always succeeded regardless. And now is the time. I ain’t waiting," Boyega said, as seen in a video shared by CBS News’ Haley Ott.

The actor also made clear that he doesn't care about potential career consequences for speaking out, something he's already stated on Twitter. "Look, I don't know if I'm going to have a career after this, but f*ck that," he said.

It's true what they say — not all heroes wear capes.