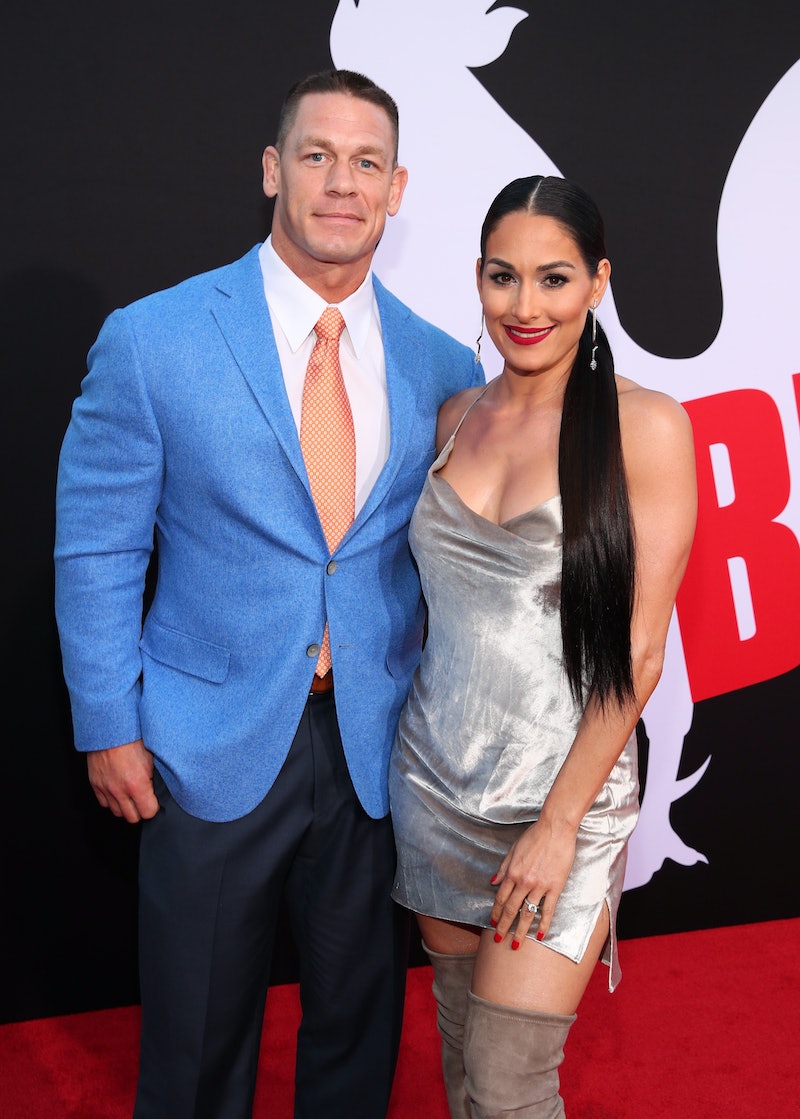 After breaking off their engagement weeks before their wedding, it appears that there's some great news in store for WWE royalty. According to Us Weekly, John Cena and Nikki Bella are back together. The news comes after much speculation into the couple's possible reunion. (Bustle reached out to reps for Bella and Cena for comment, but did not receive an immediate response.)

A source told Us Weekly that the split was ultimately really good for their relationship. "Nikki called off the wedding earlier this month so she could have more time to make a decision with what she wanted in life,” they told the publication. Their breakup, which was announced on April 15 gave both of them a little more perspective into what they truly wanted. Eventually, they came to realize that they did want to be with each other.

The source went on to say, "It [the split] didn’t mean that any love was lost, or that they lost any feelings for one another, but they both have realized that they love each other and want to be with one another.” It's nice to see that Bella and Cena were able to make things work in their relationship. Their reunion seemed like a long time coming, if some reports and comments were any indication.

On May 28, Cena tweeted something rather... interesting that got some fans wondering whether he was talking about a reunion with his former fiancée. The Blockers star tweeted, "Let's stop messing around, and start messing around." Now, his tweet may not necessarily have been about Bella. However, his message came the morning after an episode of Total Bellas aired in which the couple (pre-breakup) found themselves disagreeing about a pretty important issue: whether or not they'll have children. The episode ended with the pair wondering whether they should get married, at all. (They, of course, later broke up partly because of these issues.)

So, some took his tweet to mean that he is ready to "start messing around" by getting serious about his relationship with Bella. It's definitely possible that that's what he meant. But, since he didn't clarify further, fans could only speculate about their fave WWE couple's reunion.

Cena's tweet came shortly after People reported that a reunion for the couple could be in the cards. On May 21, the publication noted that, while things weren't exactly official just yet, the reunion was inevitable as a source told them, "They’re basically back together."

There was yet another recent sign that the two were bound to find their way back to each other when Cena commented on their breakup situation on the Today show on May 14. He got super real about his feelings on the show and said that he still loves Bella. He told hosts Kathie Lee Gifford and Hota Kotb very definitively that, "For anyone out there speculating on what I’m doing with my life now: I still love Nicole. I would still love to marry Nicole. I still would love to have a family with Nicole.”

The news of Bella and Cena's reconciliation is sure to delight fans of the couple who have followed their story. As Us Weekly reported, the Total Bellas stars were together for six years before splitting up in April (they also went through a brief split in January, but soon reunited). At the time of their split, they wrote that they still had "a great deal of love and respect for each other," which is definitely evident from Cena's comments on the Today show.

And it appears that Cena and Bella's love story isn't over just yet. Based on Us Weekly's report, the E! stars are back together and are all-in on making their relationship work.