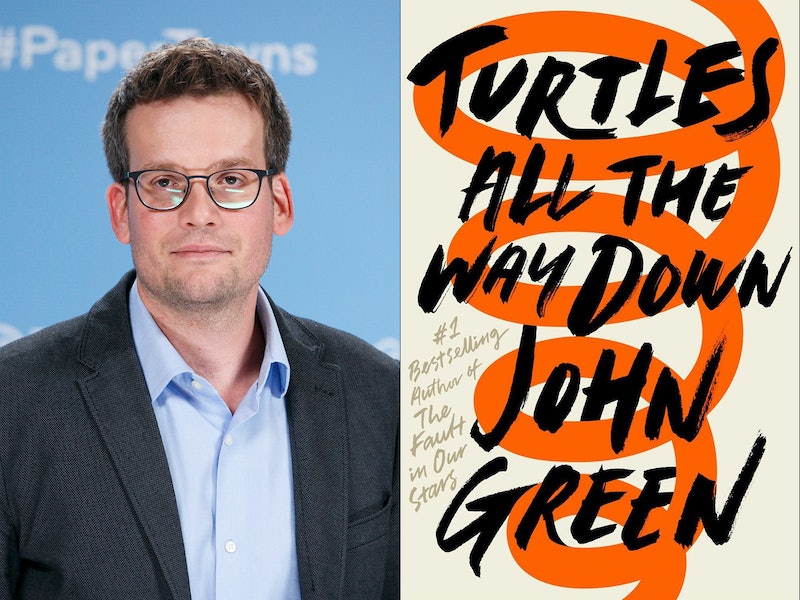 Chances are you've heard the news that John Green's new book Turtles All The Way Down is here, his first book since The Fault In Our Stars was released five years ago. As is the case with John Green, this book focuses on the unique angst of young adulthood while also addressing complicated and urgent matters of mental health. In other words: it's a must-read, and you won't want to miss it. Bustle has an exclusive audiobook excerpt from Turtles All The Way Down to tide you over until you can make a bookstore run after work. The brief excerpt, read by the audiobook's narrator Kate Rudd, gives readers a glimpse into the mind of the novel's heroine, Aza Holmes.

Aza, a 16-year-old from Indianapolis, struggles with obsessive compulsive disorder — all while trying to navigate the ups-and-downs of young adulthood: dating, college admissions, overbearing parents, and friendship drama. But her day-to-day problems are made nearly unbearable by her obsessive "thought spirals" which, among other perils, have convinced her that she's a fictional character.

John Green, who has struggled with severe anxiety and obsessive compulsive disorder for most of his life, told New York Times that he wrote this novel, in part, to show teenagers that there are adults living fulfilling lives while managing chronic mental illness. The author has been extremely open about his struggles in recent months, even posting a video earlier this summer to speak candidly about his OCD and about traditional media portrayals of the disorder that almost exclusively show the symptoms that are visible to the outside world. In other words, when you see someone with OCD on TV, you likely see them washing their hands or counting the number of steps they take — not grappling with debilitating inner thoughts. In Green's own life, OCD has manifested itself more internally. "I experience these obsessive thought spirals, in which intrusive thoughts — that is, thoughts that I don't want to have that seem to come from outside of me — hijack my consciousness," he says in the video.

"This is exhausting, of course, but it's also sort of terrifying," he adds. "Because one, I can't stop being scared of the thing I'm scared about. And two, if I can't choose my thoughts and I am, at least in part, made up of those thoughts, then am I actually the captain of this ship I call myself?"

In the video, Green also talks about the "romanticization" of mentally ill heroes in film and literature — i.e. detectives who are able to sort through indecipherable clues with ruthless efficiency because of their mental illness.

"I don't feel like my mental illness has any super-powered side-effects," he says.

It's because of this, he explains, that he felt the urge to write about mental illness in Turtles All The Way Down. "The book is fictional, but it began for me by thinking about what it would be like to be this one particular 16-year-old girl, Aza Holmes, who's trying to be a good daughter and a good friend and a good student and maybe even a good detective, while also living with terrifying thought spirals that she cannot see, hear, but are nonetheless very real," he says.

In the exclusive audiobook excerpt, which you can watch and listen to below, Aza Holmes gives readers an inside look at the "thought spirals" that have caused her to question her own existence.

The excerpt begins: "At the time I first realized I might be fictional, my weekdays were spent a publicly funded institution on the north side of Indianapolis called White River High School..."

Seriously, are you hooked or what? Listen in full below:

Turtles All The Way Down by John Green (Audiobook), Free with Audible trial, Amazon

John Green's Turtles All The Way Down is available in bookstores everywhere now.