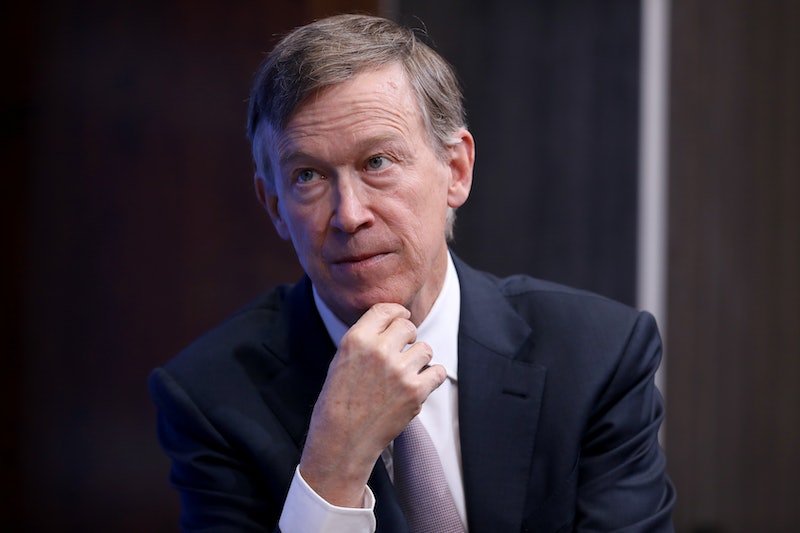 A comment the former governor of Colorado made during a CNN town hall on Wednesday didn't go over so well. When asked whether he would choose a woman for a running mate if he receives the Democratic nomination for president, John Hickenlooper suggested female 2020 candidates should be asked about adding men to their tickets.

"Some of your male competitors have vowed to put a woman on the ticket. Yes or no: Would you do the same?" CNN correspondent Dana Bash asked Hickenlooper.

"Of course," Hickenlooper responded, before quickly pivoting. "Well, I'll ask you another question — how come we're not asking, more often, the women, 'Would you be willing to put a man on the ticket?'" CNN reports that "audible groans" could be heard in the room. Bash replied that she would ask such a question "when we get to that point."

The former governor's comment was criticized by many as being out of touch. Despite the fact that most of the Democratic candidates currently believed to be leading the field are white men, many Democratic women have made it clear that they would like to see a woman in the White House next. A poll from Rasmussen Reports last month found that most Americans believe the 2020 Democratic presidential nominee will either be a woman or a person of color.

CNN reported that Hickenlooper defended his remark after the event, and Bash told the network on Thursday that the former governor's comment "obviously didn't come out the way he intended."

"Standing there with him, I got what he was trying to say," Bash said. "He was trying to sound woke. He was trying to make it sound like, 'Yes, he's a white guy running for president, but there are all these really phenomenal women also running.' But it didn't actually come out that way."

The former governor's spokesperson argued the same on Wednesday, tweeting that he had been "making the point that the media too often discounts the chances of women winning the nomination themselves."

Hickenlooper entered the presidential race earlier this month and is marketing himself as an experienced candidate who would be able to work across the aisle. In the months before his announcement — when he was expected to join the field — he faced questions about how his gender and race would affect his candidacy.

CNN's Alisyn Camerota asked him in December, "As a white guy, are you trying to calculate whether or not this is the right time for you?" Hickenlooper replied, "Well, this is the time it's worked out."

Overall, Hickenlooper is supportive of prominent women-centric issues. He is in favor of abortion rights and Planned Parenthood, and he has expressed support for the #MeToo movement.

Hickenlooper stepped down as Colorado's governor in January after serving in the position for eight years (term limits prevented him from running again). Several women ran to replace him, including his lieutenant governor, which led to some speculation that the state would get its first female governor. Instead, Jared Polis won the election, becoming the country's first openly gay governor.