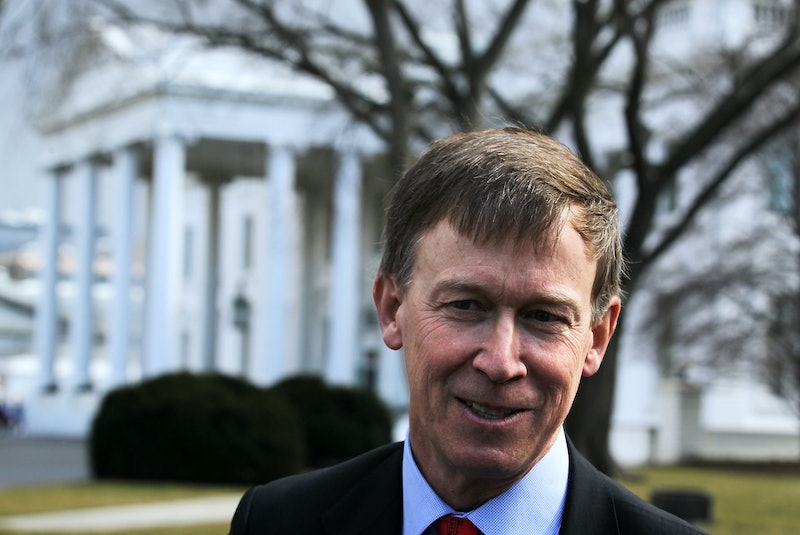 Move over presidential contenders, the 2020 Democratic primary field just got a tad more crowded. Former Colorado Gov. John Hickenlooper announced he was running for president Monday, launching a 2020 campaign centered around his years of executive experience. The former geologist-turned-brewpub owner-turned-politician (phew!) joins a 2020 primary field already congested with 13 other Democrats.

"I'm running for president because we're facing a crisis that threatens everything we stand for," Hickenlooper said as images of President Donald Trump flash by in a video announcement released Monday. "As a skinny kid with coke bottle glasses and a funny last name, I've stood up to my fair share of bullies."

The 67-year-old kicked off his campaign with a nearly two-and-a-half minute video describing how he'd turned himself into a successful small-business owner after being laid off from his geologist gig, before utilizing his skills and experience to become mayor of Denver and, later, the governor of Colorado. He touted his success in rebuilding Colorado's economy, expanding access to health care, tackling methane emissions, and enacting stricter gun safety legislation after the Aurora shooting.

"I'm running for president because we need dreamers in Washington, but we also need to get things done," Hickenlooper said in the video. "I've proven again and again I can bring people together to produce the progressive change Washington has failed to deliver."

Hickenlooper's campaign announcement doesn't come as a surprise. In fact, the former governor has been making the rounds through primary states for several months now after forming a political action committee last fall, according to The New York Times. In December, he told CNN's Alisyn Camerota that there was a "more than 50-50" chance he'd run for president, arguing that his talent for "bringing people together" could be something the country needs in 2020.

On Monday, he echoed a similar message during an appearance on Good Morning America. "I think this is a crisis of division and I think it's probably the worst period of division that we've had in this country since the Civil War," Hickenlooper said. "Ultimately I'm running for president because I believe that not only can I beat Donald Trump, but that I am the person that can bring people together on the other side and actually get stuff done."

First elected to statewide office in 2011, Hickenlooper has served two-consecutive terms (the maximum term limit allowed) as Colorado's governor. While in office he enacted a series of policies that not only lifted the state out of a recession but established it as one of the best economies in the country, The New York Times has reported. In response to a mass shooting at a movie theater in Aurora, Colorado, that saw 12 people killed in 2012, Hickenlooper signed landmark gun safety bills that introduced universal background checks and gun magazine limits.

Hickenlooper is expected to hold a kickoff rally in Denver's Civic Center Park on Thursday before officially embarking on the campaign trail with his first stop being Iowa, The Colorado Sun has reported.