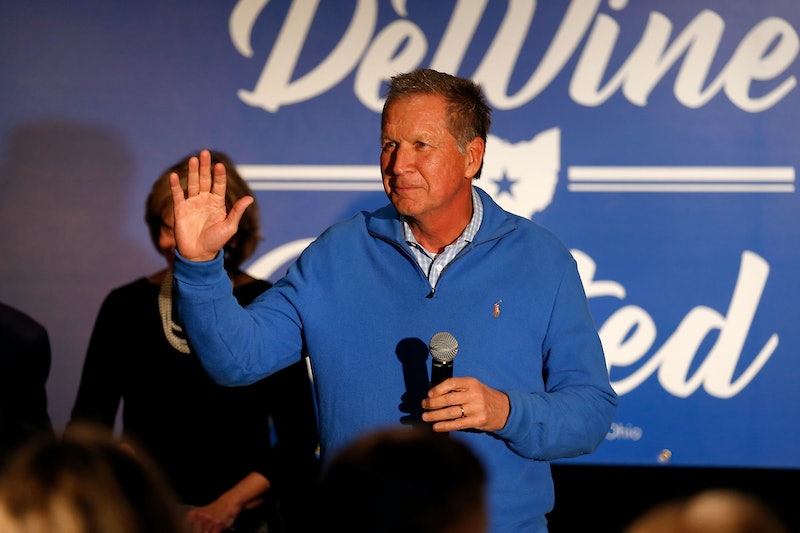 After two failed presidential campaigns, Ohio Republican Gov. John Kasich is "very seriously" considering running for president in 2020, according to a Sunday interview with ABC's This Week. When asked by host George Stephanopoulos how he's considering his presidential ambitions, Kasich said, "I'm considering it George, these are earnest conversations that go on virtually every day with some of my friends, with my family."

Kasich — who ran for president famously in 2016 against Donald Trump and less famously in 2000 — has served two terms as Ohio governor and is barred by term limits from seeking a third consecutive term. This hasn't stopped Kasich from being a vocal critic of the Trump administration, even as he signed bills supported by the administration.

"We need different leadership, there isn't any question about it. And I'm not only just worried about the tone and the name calling and the division in our country and the partisanship, but I also worry about the policies," Kasich told ABC's This Week. "You know, rising debt, the problem and inability to deal with immigration, the problems that we have as America alone in the world."

Kasich said he still travels to different parts of the country as a governor, and that his consideration of a run isn't part of a ploy or game. He told ABC's This Week, "I don't know when I will have to make a decision, but let's not, let’s be clear, I'm not being coy, I'm not trying to do this for some kind of a game. This is really, really serious to me."

However, Trump's approval rating remains high among Republican voters. Gallup's Presidential Job Approval Center found that while only 43 percent of all Americans approve of Trump, 89 percent of Republicans approve of the job Trump is doing. Kasich could have an uphill battle if he does choose to run, but he seems undeterred.

"At what point does somebody work and stand on principle, to say that the direction we’re going is wrong?" Kasich asked Stephanopoulos. He continued:

I, obviously, want to have some sort of a practical opportunity, but you want to be able to make a statement. Now maybe I do that by running again or, you know, and frankly in the last election I was the last man standing with very little money and very little name recognition.

Kasich said politics are no longer predictable. "No one thought a guy like Donald Trump would be elected president. No one thought we’d have electric cars," he said. "No one thought we could talk on phones and see the person we're talking to. I mean, this is a time of change, dynamic change."