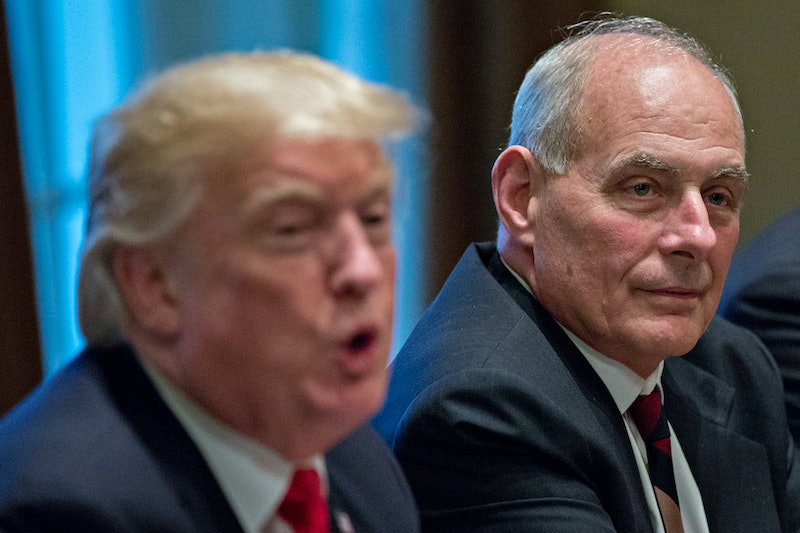 "Military people don’t walk away," President Trump's outgoing chief of staff told The Los Angeles Times in a seemingly straightforward summary of his time in the "bone-crushing hard job." John Kelly spoke out about the Trump White House with few holds barred in a piece published Sunday. The article is full of quotes, but it's perhaps the summaries of the interview — between the quotes — that are the most telling.

The LA Times reported that Kelly defended himself in the interview and suggested that he should be judged by what Trump did not do. Kelly told the paper that Trump never ordered him to do anything illegal, though, "because we wouldn’t have." Kelly told The LA Times he would have resigned first.

As for the president's decisions, they've all been informed, Kelly said — even the more controversial ones. "It’s never been: The president just wants to make a decision based on no knowledge and ignorance," Kelly told The LA Times. "You may not like his decision, but at least he was fully informed on the impact."

One of the big differences of opinion between Kelly and the president — from the beginning — was over withdrawing troops from Afghanistan. Trump was ready to withdraw when Kelly became chief of staff, moving over from Secretary of Homeland Security, in July 2017.

"He was frustrated. It was a huge decision to make ... and frankly there was no system at all for a lot of reasons — palace intrigue and the rest of it — when I got there," Kelly told The LA Times. Kelly kept it from happening during his tenure, but Trump announced a partial withdrawal from Afghanistan in the coming months and a full withdrawal from Syria and the fight against ISIS.

Kelly also told The LA Times that he doesn't share the president's view on immigration completely. He said he has compassion for the people coming to the country, especially for the children. "Illegal immigrants, overwhelmingly, are not bad people," Kelly said, blaming Congress for not creating better immigration laws that would make the country less appealing.

He chose not to respond to Trump's comments that Democrats were to blame for the deaths of two children in U.S. Customs and Border Protection custody.

Nor would Kelly comment on Trump's threats to cut aid to Central America. But he did contradict it somewhat. "If you want to stop illegal immigration, stop U.S. demand for drugs, and expand economic opportunity," in Central America, Kelly told The LA Times.

What he would talk about was Trump's proposed border wall — the named reason for the current government shutdown. "To be honest, it’s not a wall," Kelly told the paper.

"The president still says ‘wall’ — oftentimes frankly he’ll say ‘barrier’ or ‘fencing,’ now he’s tended toward steel slats," Kelly told The Times. "But we left a solid concrete wall early on in the administration, when we asked people what they needed and where they needed it."

Whether the wall specs change after Kelly's departure, like the Afghanistan withdrawal did, is a question for 2019. The shutdown will stretch into January.