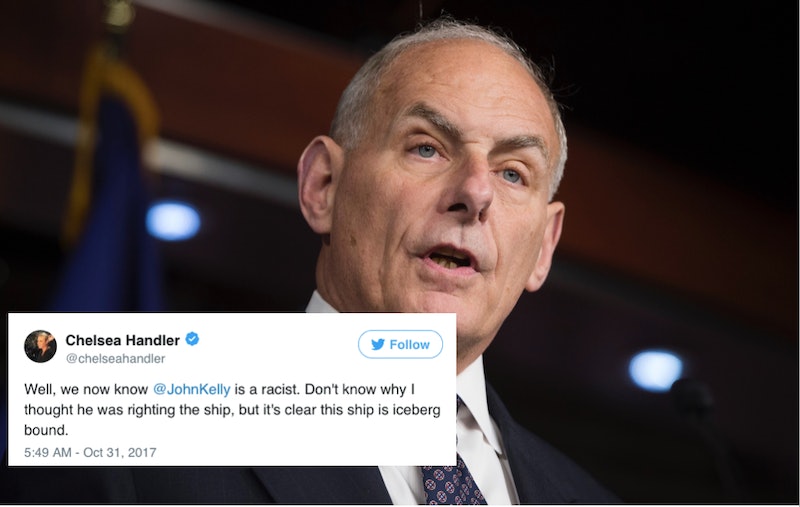 When a white man tries to defend the Confederacy's position in the Civil War, it usually doesn't go over well — and White House chief of staff John Kelly was no different. President Trump's right-hand man told Fox News on Monday the Civil War began because of "the lack of an ability to compromise" from people of "good faith" on both sides. Twitter was not pleased by Kelly's Civil War comments.

How did this topic even come up, you ask? Kelly was initially talking about the push to remove Confederate flags and monuments throughout the U.S., arguing that modern-day Americans shouldn't "take what we think now and apply it back then."

After describing Confederate general Robert E Lee as “an honorable man” who "gave up his country to fight for his state," the White House chief of staff said:

The lack of an ability to compromise led to the Civil War, and men and women of good faith on both sides made their stand where their conscience had them make their stand.

Twitter users were quick to point out that saying people fighting to keep slavery were acting on "good faith" is blatantly racist, as well as the fact that "compromise" would have never freed the enslaved.

Author Ta-Nehisi Coates pointed out that compromises were constantly made on behalf of enslaved Americans, most notable the Three-Fifths Compromise that counted a slave as three-fifths of a person when determining states' population for representation in Congress. Even with all these "compromises," slavery still persisted.

On Why The U.S. Even Exists

Democratic Rep. Ted Lieu notes that the United States wouldn't exist if President Lincoln had compromised on slavery. After the Civil War, the Confederate States were forced to join the North and carry on as one nation.

On The Absurdity Of Compromising

Compromise in its essence requires two parties to meet in the middle. But what's the middle of slavery and no slavery?

On Changed Perceptions Of Kelly

When Kelly stepped in as chief of staff, he was perceived as a moderating force in the White House who would attempt to reign in President Trump's behavior. However, comedian Chelsea Handler said his Civil War comments opened her eyes to the fact that he can't steer the ship away from an iceberg.

Those who never thought Kelly was better than the rest of the Trump administration were glad to see others coming around to their side.

On "The Adult In The Room"

In the same vein, Judd Legum pointed out that someone who think Robert Lee was "a cool dude" probably shouldn't be "the adult" in the Oval Office.

Of course, many wanted to talk about what Kelly's comments highlighted about his beliefs. Suggesting that he would have compromised with slave owners sends the message that Kelly would have been okay with keeping slavery partially intact.

On How The White House Treats Black People

Examples of how Kelly and President Trump responded to news involving Black people recently were also brought up. After Army Sgt. La David T. Johnson was killed in an ambush on the Niger-Mali border Oct. 4, it took the president over a week to call his widow. Even then, Army Sgt. Johnson's family accused Trump of disrespecting the fallen soldier.

After Democratic Rep. Frederica Wilson publicly accused Trump of this, the president claimed to have "proof" she was lying. Said proof has yet to be shown.

In one of the most topical reactions, Walter Shaub, former director of the U.S. Office of Government Ethics, said he suspects Kelly will be dressing up as a racist for Halloween (and every other day).

On The Right Side Winning

Kashana, on the other hand, will dress up as someone who's confident not compromising was the way to go.

On A More Serious Note...

Some believed Kelly's comments were grounds for resignation.

On What America Should Expect

But after all the drama that inevitably builds on Twitter following a political blunder in 2017, someone always has to ask: "What did you expect?"

It's worth noting that Kelly's Civil War comment came the same day it was revealed two Trump campaign aides had been indicted and a third had pled guilty to lying to federal agents. It's not unusual that Kelly didn't want to talk about the FBI investigation into potential collusion with Russia, and — intentional, or not — his Civil War comment diverted some attention away from the Russia saga.