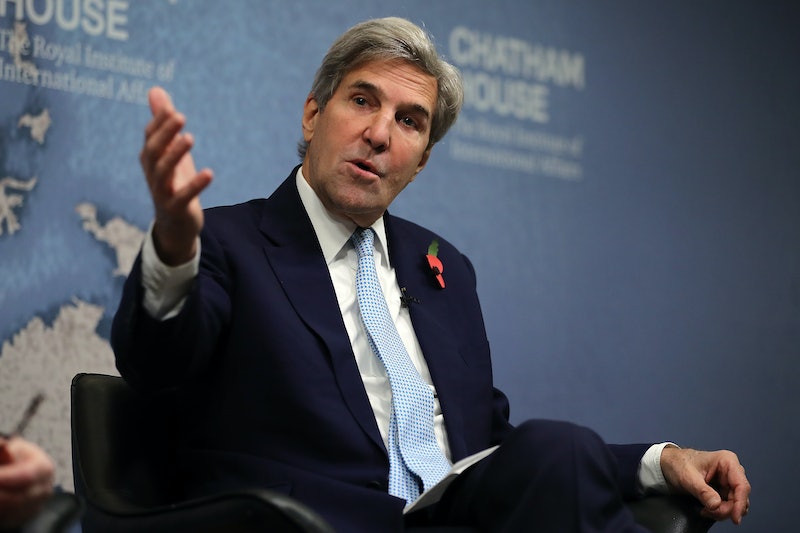 During a recent congressional hearing, a former secretary of state took the president to task for his lack of leadership on climate change — and offered heavy words of praise for a freshman congresswoman by comparison. John Kerry said Alexandria Ocasio-Cortez has done more to tackle climate change than Trump has throughout his entire life — and emphasized that the Republican Party needs to step up when it comes to protecting the environment.

The former secretary of state made his remarks during a House Oversight and Reform Committee hearing addressing the linkages between national security and climate change, The Hill reported. When responding to a question about funding for the Green New Deal, an environmental protection resolution that was introduced by the New York congresswoman, Kerry took a minute to compare AOC and the president, USA Today noted. As he asserted at the hearing, per the paper:

My focus is on how we're going to move forward [on the issue of climate change] and you know, we all have some differences with one piece of legislation or another. But, in proposing what she has proposed together with Senator Markey, Congresswoman Ocasio-Cortez has in fact offered more leadership in one day or in one week than President Trump has in his lifetime on this subject.

In addition to comparing Trump and Ocasio-Cortez's approaches to tackling climate change, Kerry also lambasted Republicans for criticizing the Green New Deal while failing to come up with a climate change solution of their own. " ... There are a lot of different proposals about how to proceed [on addressing climate change]. I don't know that any of them are coming from your party or your side of the aisle," Kerry said to Congressman James Comer, a Republican from Kentucky, at the hearing. "Do you have a plan to deal with climate change? I think you said you're not sure of the science."

Kerry then questioned whether Republicans have taken any concrete actions over the past few years to address the issue — and suggested that Congress move beyond politics for the sake of environmental protection. "My question is, where's your proposal?," Kerry said to Comer. "Did you have any hearings on it [climate change] in the last few years? ... I think what we ought to do is stop the politics and get down to really serving the people."

As it turns out, Congresswoman Ocasio-Cortez got word of Kerry's remarks and took to social media to thank him for his support. On Twitter, Ocasio-Cortez shared Kerry's quote comparing her and Trump and also wrote, "Honored and humbled. Thank you, @JohnKerry."

As Newsweek noted, Ocasio-Cortez, along with Senator Ed Markey of Massachusetts, introduced the Green New Deal back in February of this year. The non-binding resolution proposes a comprehensive plan for combatting climate change and enhancing social welfare through cutting carbon emissions, transitioning to renewable energy, and creating jobs, among other initiatives, the New York Times reported.

Overall, while the tenets of the Green New Deal have been somewhat controversial among lawmakers, as the Deseret News described, it's clear that Kerry believes that the resolution has sparked an important conversation about climate change. This conversation is one to which the former secretary of state believes that Trump and the Republican Party need to pay particular attention.