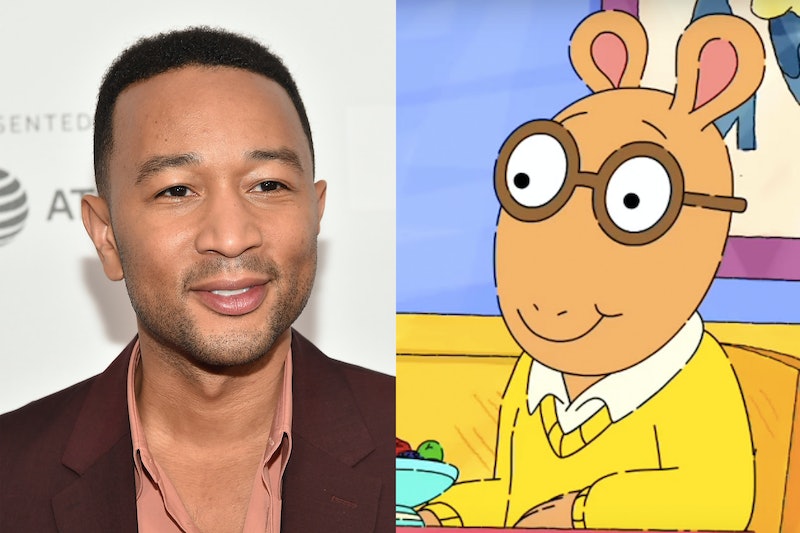 Just in case you weren't already obsessed with Chrissy Teigen and John Legend enough, this new ad ought to do it, especially since it incorporates a hilarious meme. Legend dressed as Arthur in the couple's new commercial for Google Duo, and not only does it give us yet another opportunity to gush over this adorable marriage, but it's also more proof that Legend and PBS' beloved aardvark were, most likely, separated at birth.

In the video, Legend and Teigen are video chatting using the Google Duo app as he tries to pick out an outfit for an upcoming event. He shows off his ensembles to Teigen, who lets him know her thoughts right from bed. He tries on a few ridiculous things before settling on a pretty simple outfit: jeans and a yellow sweater, aka Arthur's signature look.

"Arthur!" Teigen exclaims in glee, as everyone else also will while watching this video, before dissolving into explosive laughter. Then, the camera zooms in on Legend's fist, bringing the famed Arthur meme full circle.

The entire video is pretty cute, but the best part is definitely that ending. And since a simple description does not do it justice, here's the full commercial, which you need to see for yourself:

If you ever wondered whether Legend is in on the joke, this should absolutely answer that question for you. To be fair, an Arthur comparison isn't the worst thing in the world — who didn't absolutely adore that aardvark growing up? Of course, he's not as cool as Buster Baxter, but who is?

Legend and the Arthur meme have a long history together. Of course, there's the original Arthur meme, which came to be before the Legend comparisons began, featuring Arthur's pissed off closed fist:

And from there, it spiraled. It didn't take long before someone realized that Legend looks like Arthur when he takes his glasses off, and soon enough, Teigen had to jump in with a tweet of her own, too.

At that point, Legend said he had no idea who Arthur is... but is that even possible? Was he lying to us? It's seriously doubtful that Legend could have lived this long and never encountered Arthur, of all aardvarks. To be fair, Legend was 18 when Arthur premiered in 1996, so he was never in the show's key demographic, but it's a cultural phenomenon and he should be aware.

You might think that the meme would have died down after that, but you would be wrong. After Legend dared wear a yellow shirt in his family's Easter photo last year, he immediately got called out by an Arthur parody account, and the tweet went viral. Of course it did — you can't just be John Legend, wear Arthur yellow, and think no one is going to notice.

If anything, this new video is proof that the John Legend Looks Like Arthur meme isn't going anywhere anytime soon. In fact, Legend's Twitter bio even says "no relation to Arthur," so he is, at minimum, accepting that this is A Thing. And honestly, he has a pretty good sense of humor about it. Then again, what are his options? When you're a Grammy-winning artist who is constantly compared to a third grade aardvark, all you can really do is just roll with it.

All we can hope for now is that someday soon, Luna watches Arthur for the first time and gets him confused for her dad — and that Teigen catches the whole thing on video for the rest of us to enjoy. In the meantime, this video will do it. If Legend can't escape his Arthur-looking face, he might as well embrace it.

More like this
Chrissy Teigen & John Legend Reveal Their New Baby’s Name & Share First Photo
By Stephanie Topacio Long and Jake Viswanath
Beyoncé Has Officially Won The Most Grammys Ever & Twitter Is Losing It
By Jake Viswanath
The Beyhive Is Mad At Harry Styles After Beyoncé’s Album Of The Year Snub
By Jake Viswanath
Here’s How You Can Watch The Grammys 2023 In The UK
By Emma Madden and Catharina Cheung
Get Even More From Bustle — Sign Up For The Newsletter
From hair trends to relationship advice, our daily newsletter has everything you need to sound like a person who’s on TikTok, even if you aren’t.