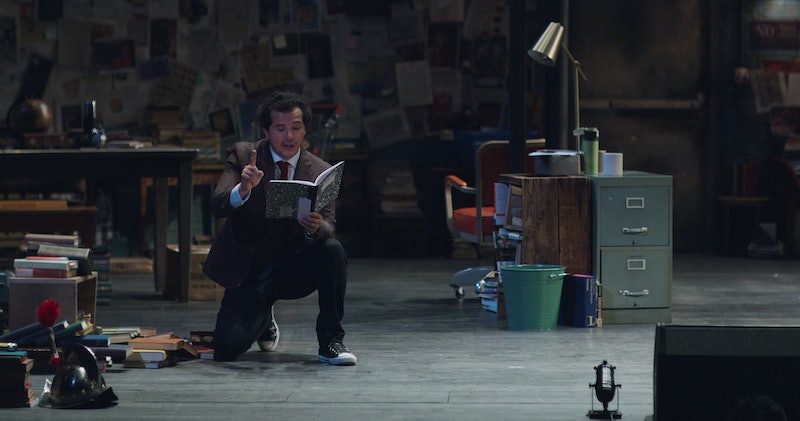 “Settle down, we’ve got a lot of work to do here tonight... I’ve got to undo your whole education and the entire way you think and it’s not going to be easy because that sh*t’s in there deep.”

These opening words resonated with me as I sat in the New Jersey Performing Arts Center watching John Leguizamo performing his one-man show Latin History for Morons. The show, a taped version of which hits Netflix Nov. 5, follows the legendary Colombian comedian as he sets out on a mission to find Latinx heroes for his son to write about for a school project. This requires him to do some deep digging and research of his own, so he takes the audience along with him as he dives into the complex, rarely told histories of Latinx people. Taking us through their successes, betrayal, and ultimate genocide, Leguizamo recreates these stories on stage with irreverent humor, righteous rage, and weaponizes history as a call to action for modern day Latinx audiences.

Throughout the performance, I saw my own experience reflected through John’s troubled relationship with his son, Buddy. While there has never been a formal language barrier between my father and I, our vastly different lived experiences, clashing personalities, and general stubbornness have always created the perfect storm for frustration on both sides. But if there’s one thing that he’s consistently and successfully instilled in me, it’s this statement: “There are always going to be people in this world who are going to try to tell you who you are; that’s why you need to be able to go into any space owning exactly where you come from.”

Similar to Buddy, I attended a private high school on the Upper East Side; all I wanted to do was blend in with the majority-white student population. As an East Harlem native who grew up seeing the Puerto Rican flag on every block, I didn’t think my heritage was anything to be proud of. I was ashamed of my natural hair, so I would spend every other weekend in the Dominican hair salon making sure it would fall smoothly down the back of my navy blue uniform blazer, wearing a Blair Waldorf-inspired headband to match.

Though I was never made fun of explicitly for being Latinx, there were always backhanded comments. There was the one Spaniard girl who casually told me and a couple of other Latinx girls in our group that if it weren’t for her people, we would still be in caves. There was another time I made another girl’s jaw drop because I didn’t have dishwasher in my apartment or a doorman in my building.

When I’d go home and tell my parents about these stories, my dad always insisted that I remained true to my roots. He'd remind me of Puerto Rican heroes such as The Young Lords Party, a community activist group that helped mend the neglected communities that we lived in. He’d tell me about “El Maestro” Pedro Albizu Campos, an Afro-Boricua who went to Harvard and led the Puerto Rican nationalist party in the early 1900s. Like Leguizamo's character, the unfiltered, occasionally disrespectful language he used would make any politically correct millennial roll their eyes, but his point was clear — we have an immense responsibility to our ancestors to remember our history and keep moving the culture forward.

Like most people, I didn’t truly understand the lessons my dad was teaching me until later. When I went away to college in Wisconsin, there were people who didn’t even know what a Puerto Rican flag was. It was there that I realized the importance of being loud and proud about my Latinidad. So many people — professors and students alike — tried to undermine my existence in an elite academic space because of my ethnicity. I had no choice but to learn all there was to know about where I came from, so that when someone tried to tell me who I am, it wouldn’t phase me — just like my father told me years before.

In a political climate that pushes a dangerous agenda of white hegemony and American exceptionalism, Latin History for Morons shatters the conventional ideal of the American Dream. Instead, it implores Latinx audiences to seek out our own heroes who have paved the way for us to succeed and influence our everyday lives. Unlike many Broadway shows with inspirational stories that might never reach the people who need it the most, this timely message is made accessible to any individual or household with a Netflix account, a radical feat in itself. This is Leguizamo's way of telling Latinx people all across America, “I see you. I’m here with you. We have work to do.”

During a time in which we are being told that our lives don’t matter, this show inspires us to rise up and keep moving forward. With a perfect mix of ancestral knowledge, irreverent humor, and tough love, John Leguizamo's character is what we have always known our own Latinx families to be: a constant reminder of where we come from and where we’re capable of going.