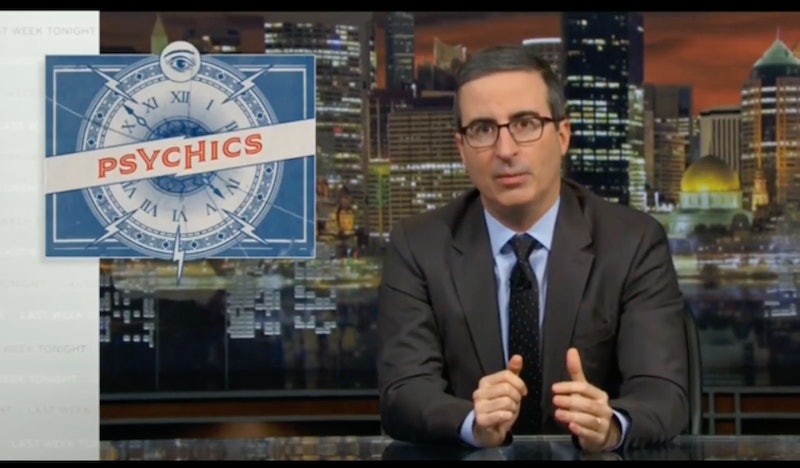 Sunday's episode of Last Week Tonight took an in-depth look at a somewhat unexpected topic. Notably, the show's host moved away from his typical political coverage and instead focused on a topic that is somewhat pervasive in American popular culture — the psychic industry. Indeed, John Oliver lambasted the psychic industry, characterizing its practices as "reckless" and exploitative of people's grief.

Oliver opened his segment on the psychic industry by making it clear that he doesn't believe that psychics are real. However, he acknowledged that many Americans do indeed believe in psychics and in their ability to communicate with the deceased. In fact, the late night host revealed that a recent poll from the Pew Research Center found that four in ten Americans believe in psychics.

Oliver then noted that the industry that caters to those who believe in psychics is "larger and grimmer than you might assume" and is rife with "a lot of predatory behavior." For example, the host noted that the Federal Trade Commission (FTC) found that the Psychic Readers Network, which often ran ads featuring the well-known psychic, Miss Cleo, had charged people around $1 billion for psychic readings over a three-year period and "collected half of it." Oliver appeared astonished by this sum, saying, " ... They took in $500 million! I had no idea psychics could make that much money.”

Oliver continued by pointing out that there are a host of reality shows on television featuring mediums who claim to be able to communicate with the dead. However, the late night host noted that he has some doubts about these mediums' abilities, saying he believes they primarily rely on two tactics to make it seem like they are in touch with the deceased.

Oliver described the first technique as cold reading, which he said is "taking high probability guesses, like 'I'm sensing a loved one who had problems in the chest area' or 'is there a 'j' or an 'm' in a loved ones name?" The late night host then played several clips that he thought reflected this tactic. This included a video in which psychic John Edward suggested during a reading that he was communicating with a deceased person related to an audience member — and that the person had an Irish surname. Notably, Edward's reading was taking place in Huntington, Long Island, which is home to many people of Irish descent, Oliver revealed.

The late night host then described another tactic he believes psychics employ to convey the impression that they're communicating with the deceased — hot reading. As Oliver noted, hot reading simply constitutes doing research ahead of a reading to gain familiarity with someone's deceased loved one. This tactic is particularly useful if the subject of the reading is well-known, the comedian pointed out.

Oliver asserted that he believes these two tactics allow psychics to feign communication with the dead — something he thinks is quite harmful. As the comedian put it:

At best, it is reckless for a stranger to take a stab at ventriloquism with the dead ... But, at worst, when psychic abilities are presented as authentic, it emboldens a vast underworld of unscrupulous vultures more than happy to make money by offering an open line to the afterlife.

The host wrapped up his segment by calling on mainstream television and popular culture to stop normalizing the psychic industry, because he feels it takes advantage of those who are vulnerable in a time of grief. "Every time a psychic makes a grieving widow cry on Dr. Oz, ten con artists get their wings. And that is a problem," Oliver asserted.