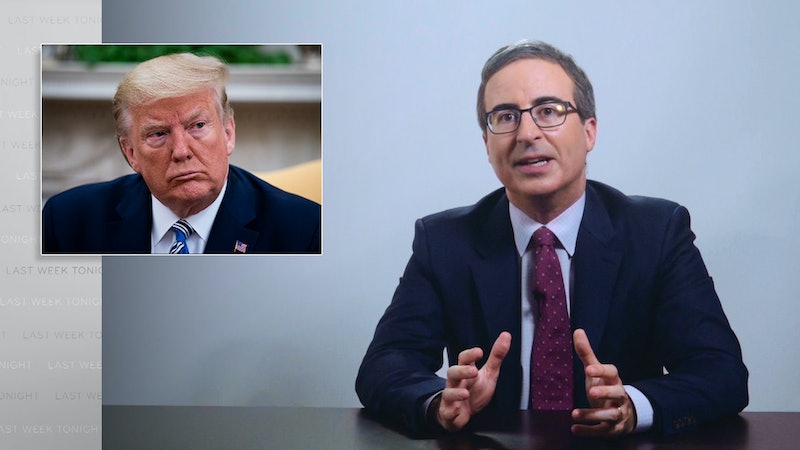 Following several weeks of protests against police brutality and racial injustice in the United States, John Oliver broke down the need for extensive police reform on Last Week Tonight. On Sunday, June 7, his show focused on the systemic issues with law enforcement in the U.S., noting how the the history of policing is deeply, "entangled with white supremacy." And, though he did not call for it outright, many are using his 33-minute episode as the perfect explainer for why we need to defund the police.

In May, a video of white Minneapolis police officer Derek Chauvin kneeling on George Floyd's neck for over eight minutes, resulting in Floyd's death, inspired protests against police brutality across the country. Two weeks later, the protests have only gotten more organized and widespread. Many activists have called for significant change, including the defunding of and divestment from the police, as well as a reckoning with the origins of policing in the United States.

And, for those still unsure about the idea, Oliver's most recent episode broke down "how the f*ck we got to this point, what the obstacles to reform have been, and what we can do going forward." He explained the history of policing, noting how, "for much of U.S. history, law enforcement meant enforcing laws that were explicitly designed to subjugate Black people." He explained that the earliest iterations of police in the United States were "slave patrols," tasked with capturing and returning people who had escaped from slavery, and that for a century after the end of slavery, police in the South enforced segregation, "while allowing and sometimes participating in lynchings and anti-Black terrorism."

Toward the end of the episode, Oliver made the case for defunding the police. Pointing to the institution's painful history and the ongoing systemic obstacles that make reform extremely difficult if not impossible, the host called out corrupt police unions that negotiate language into contracts that make removing officers impossible, or include "qualified immunity," which prevents lawsuits against police officers. Instead of marginal "reforms," the late-night show host called for us to, "rethink the police from the ground up."

Oliver is not the only celebrity questioning the effectiveness of police reform. On Sunday, John Legend also offered a primer on defunding the police on Twitter, calling for redirecting funds to social services, including housing support, health care, education and child care, the arts, drug treatment, and community centers, as per Billboard.

Across the country, calls to defund, divest from, and abolish the police, while reinvesting funds in critical resources for Black and brown communities, have continued to gain traction. On Sunday, Minneapolis City Council members announced plans to defund and disband the police department, committing to rebuilding "a transformative new model of public safety," as per CNN. Last week, Los Angeles Mayor Eric Garcetti pledged to cut between $100 million and $150 million from the police department's budget, though many activists feel this proposal does not go far enough to reallocate resources, according to the New York Times.

Moving forward, activists will continue to fight for significant change, including divestment from the police, addressing the racism inherent in the history of policing, and reallocating funding to community resources. Legend and Oliver are just two of the latest public figures to support some iteration of defunding the police, and as more speak up for the practice, new community-based models for safety will be one step closer to becoming a reality.

More like this
This Pre-'Love Island' Video Of Olivia & Zara Together Changes Everything
By Bustle UK
Erika Jayne's Estranged Husband Tom Girardi Has Been Indicted On Fraud Charges
By Jake Viswanath
'RHOSLC’s Heather & Whitney Are Still On A “Friendship Break” After Season 3 Reunion
By Jake Viswanath
RHOP’s Robyn Dixon Explained Why Juan Paid For Another Woman's Hotel Room
By Brad Witter
Get Even More From Bustle — Sign Up For The Newsletter
From hair trends to relationship advice, our daily newsletter has everything you need to sound like a person who’s on TikTok, even if you aren’t.