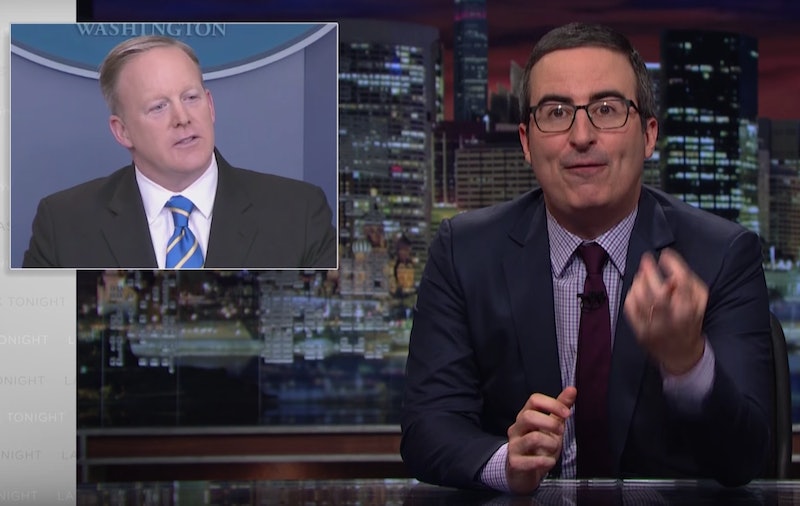 The first episode of Last Week Tonight focused — no surprise here — on President Donald Trump. Instead of spending 30 minutes banging his head on the desk, John Oliver decided to be proactive about things and answer some important questions on the relationship between Trump and the truth. He centered his main segment on answering questions about how a liar could end up in the White House, where the lies come from, why do people believe them, and what can be done about the whole mess. Oh, and Oliver called Sean Spicer "Melissa" while he made his point, which made the whole thing even better.

Oliver mentioned Spicer because he thinks that the people working in the White House are enabling Trump by covering for the president's lies. He showed footage of Spicer's press conference in which he fought back against the truth on voter fraud by repeatedly saying that Trump believed something other than the facts. Trump has been saying 3 million voted illegally, despite no proof at all to support the claim. "That's a longstanding belief he maintains," Spicer repeated in several different iterations to the belief of no one — save perhaps for the Breitbart News correspondent in the briefing room (Oliver even said the writer gets a reserved seat in the front row).

Nearly everyone else, Oliver included, is a bit doubtful. "If he does believe that, what does that mean for democracy?" Spicer is asked during the press conference. Spicer responds, "It means that I've answered your question." The journalist doubles down, "Have you?" Oliver takes it from there, amazingly making his point by addressing Spicer as the actress who plays him on Saturday Night Live:

No you haven't, Melissa. No you haven't. Because this isn't about belief. It can't be. The incidence of voter fraud is a verifiable fact. And faith and facts aren't like Bill Pullman and Bill Paxton. When you confuse them, it actually matters. Real people get hurt when you make policy based on false information. Billions will get spent on a wall that won't work to prevent a crime wave that isn't happening while refugees sit in dangerous situations to prevent Bowling Green-style massacres that never took place.

The great thing about Oliver is that he's not just mentioning more problems. He actually has a solution for this one. Part of the answer is relying on the press, which he says will be under increased attack from the administration. "This administration has seized on small corrections in news coverage to paint critical outlet as fake news, attempting to delegitimize all of them. And this is only going to get worse," Oliver argued.

He went on to say that the "endgame is obvious." With a delegitimized press, where else would you turn to get your news? Oliver argues that Trump's goal is for his Twitter feed to be the alpha and omega of political information. Oliver compared that to the current situation in North Korea. "The notion that our leaders should be able to pass on half truths with impunity should be alarming to absolutely everybody," Oliver said.