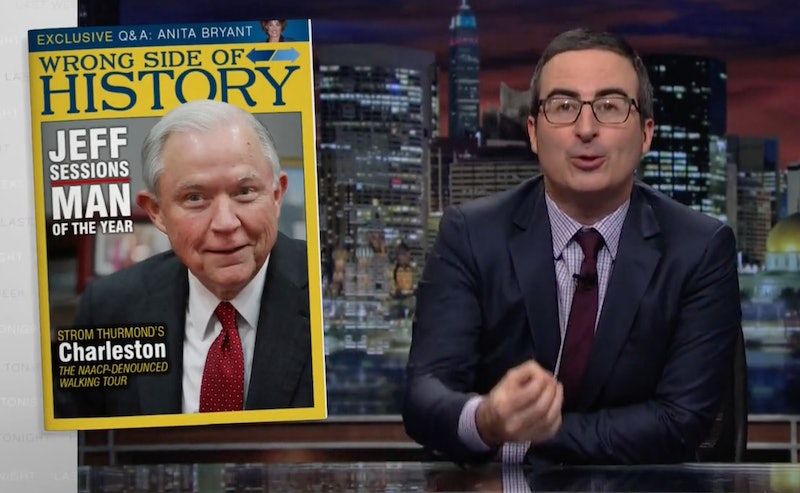 John Oliver can't get used to saying it either: "Donald Trump is president."

"That's right. We now live under President Trump, two words that will never sound normal together no matter how many times you say them," Oliver joked on the first episode of Last Week Tonight of the season Sunday night. He eviscerated the moves that the Trump administration has made in its first weeks — not the least of which were Trump's choices for his cabinet. Oliver describing Trump's cabinet picks perfectly sums up what everyone has been feeling since they were announced.

Oliver segues into the cabinet talk by acknowledging that society as we know it has changed since Trump was inaugurated: "We've been living in a world where if someone says, 'Good morning!' to you, the only respectable response is, 'No! No, it isn't. What is wrong with you?'" Oliver joked that he has been afraid of news alerts, even glad when Mary Tyler Moore died because The New York Times notification wasn't another scary Trump executive order. But news like the cabinet picks are unavoidable. You're going to hear about them.

"Inevitably somebody will come up to you and say, 'Hey, did you hear? The new secretary of labor is a big, giant jar of wasps.'" Oliver continued. "Now I'm kidding about that. The actual nominee is Andy Puzder, who has opposed raising the minimum wage and who currently heads Hardees and Carl's Jr. Then Oliver played a commercial for the fast food chains that features a nearly naked Kate Upton. Because that has so much to do with burgers.

"But before you can be horrified by Puzder, you remember Trump's attorney general is Jeff Sessions, recently named Man of the Year by The Wrong Side of History magazine," Oliver said, then summing up the entire group of Trump's picks in one brief yet dead-on rant:

In fact, all of Trump's nominees seem to have been chosen sarcastically. The Secretary of Education hates our public education system. The nominee to head the EPA hates the EPA. And the future secretary of energy is this guy...

The video cuts to Rick Perry on Dancing with the Stars. If only that were the most disqualifying bit, but then Oliver went on. "Rick Perry once proposed eliminating the department he will now head, although to be fair he later recanted saying, 'After being briefed on so many of the vital functions of the Department of Energy, I regret recommending its elimination.'" Oliver said. "I can only imagine he thought that it protected our reserves of Monster energy drinks."

These are just some of the things that Oliver argues are setting a "pace of chaos" in the country. He suggests that you find something to center yourself, as hard as that may be — Oliver's using a picture of Eddie the dog on Frasier. But I would recommend a weekly viewing of Last Week Tonight. There's no better remedy for the current political climate.