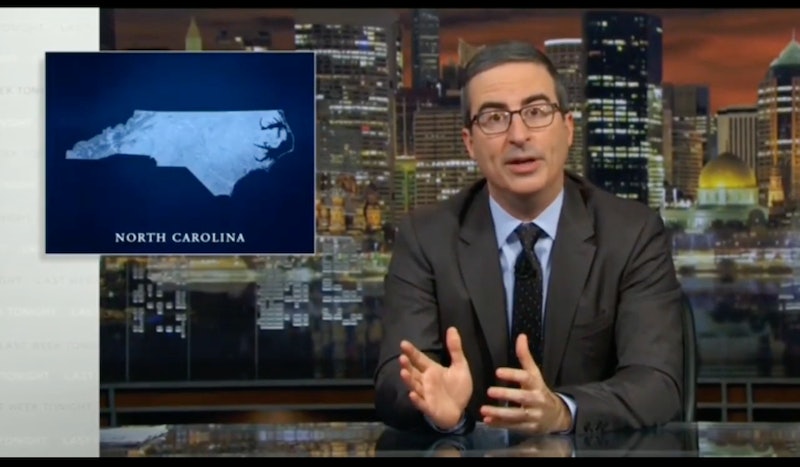 As the late night host noted, the election scandal in North Carolina is centered on its ninth congressional district. Last week, the state's elections board called for a completely new election to select a representative for the district's House seat, after finding that absentee ballots may have been corrupted during the original race in November 2018. As Reuters reported, Republican candidate Harris had won the November race, though he also recently called for a new election during a hearing on the matter in Raleigh. "It’s become clear to me that the public’s confidence in the ninth district seat general election has been undermined to an extent that a new election is warranted," Harris said on Feb. 21 (via Reuters).

As Oliver explained, Harris has featured prominently in discussions about the election scandal because one of his campaign operatives, Leslie McCrae Dowless, was accused of allegedly collecting, marking, and submitting mail-in ballots in order to secure more votes for Harris.

As the News and Observer reported, Dowless denied any wrongdoing via a statement from his lawyer on Dec. 18. "He [Dowless] has not violated any state or federal campaign laws and current ongoing investigations will prove the same," the outlet noted. Moreover, the Washington Post reported that Harris has strongly denied being aware of Dowless' alleged illegal activities.

On his show, Oliver mocked Harris' behavior in recent weeks, suggesting that the Republican candidate has been acting strangely. For example, Oliver played a clip in which Harris set off a fire alarm when exiting a building after a GOP meeting, which some interpreted as a move to avoid reporters. In the clip, the candidate is seen leaving the building through a back door and running toward his car as a fire alarm blares in the background. Oliver found this clip pretty hilarious, exclaiming:

Later on, Oliver also commented on the notion that Harris' son, John Harris, had testified during a hearing at the state election board that he had warned his father that Dowless' alleged ballot collecting seemed suspicious. Oliver then played a clip of John's testimony, in which he said, "I told him [Harris] that collecting ballots was a felony ... I thought what he [Dowless] was doing was illegal — and I was right."

In response to this clip, Oliver joked that many sons would probably love the opportunity to call their dads out in public. As the comedian put it:

Wow. Most of us could only dream about saying 'I was right' to our dads in an official setting. This guy just lived that dream. I only wish he'd gone for broke and brought up every other instance of his dad being wrong.

Overall, Oliver's North Carolina segment took a lighthearted look at a very real election scandal. His piece offered further insight into the issue as the state prepares to rerun the primary and general elections in the coming months.