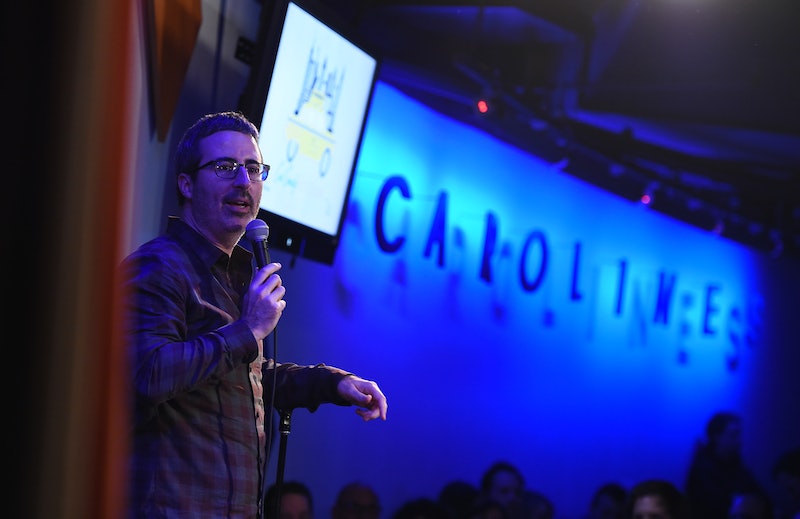 If you were one of the millions of Americans not to vote for Donald Trump, then perhaps you've been a bit frustrated as he's repeatedly claimed that he lost the popular vote due to widespread (yet made-up) voter fraud. Now, though, you can at least watch John Oliver explain how Trump's voter fraud claim originally started, and feel at least the slightest bit vindicated because you know how to read the news better than the president does. Not that that's a good thing — but still.

The way Oliver sees it, it all comes back to two of Trump's favorites sources of information: Twitter, of course, and Breitbart News. “Trump’s constant claim that ‘millions of people voted illegally’ originated, as far as anyone can tell, from some dude on Twitter who claimed in November—while providing no evidence," Oliver explained. The next steps, he goes on to say, were that that little tidbit "spread like jet fuel among right-wing sites", and then Trump himself started tweeting about it. As Oliver and The Daily Beast note, the president is highly reliant on sites like Steven Bannon's former haunt Breitbart and Alex Jones' conspiracy-laden Infowars — likely, as Oliver puts it, because they back up the worldview that he has already constructed.

The pattern that Oliver identified with the president is as follows: "Trump sees something that jibes with his worldview, doesn’t check it, half-remembers it, and then passes it on, at which point it takes on a life of its own and appears to validate itself." And for people who read the same news sources as him, Oliver says, "he doesn’t look like a crank — he looks like the first president to ever tell you the ‘real’ truth."

You've known for ages that Trump's approach to reality is unorthodox at best, especially after he spent the first couple of weeks of his presidency spouting out lie after lie. But Oliver's explanation on the matter really puts things into perspective. This is a president who doesn't rely on normal, trusted sources of information, and so far he seems determined to govern based on what he hears from Fox News, Breitbart, and even Infowars.

This is a scary time, but your response cannot be to just sit back and let it happen. Trump may be determined to eschew any fact that he doesn't like, but that just means that you have to hold onto them harder than ever — and don't just blindly trust everything that you read on Twitter. If you can't find at least two reputable news sources reporting it, don't believe it to be true. Doesn't seem that tough understand, right? And yet, as John Oliver has now explained in full, the current president can't quite get it. This is the world you're living in.