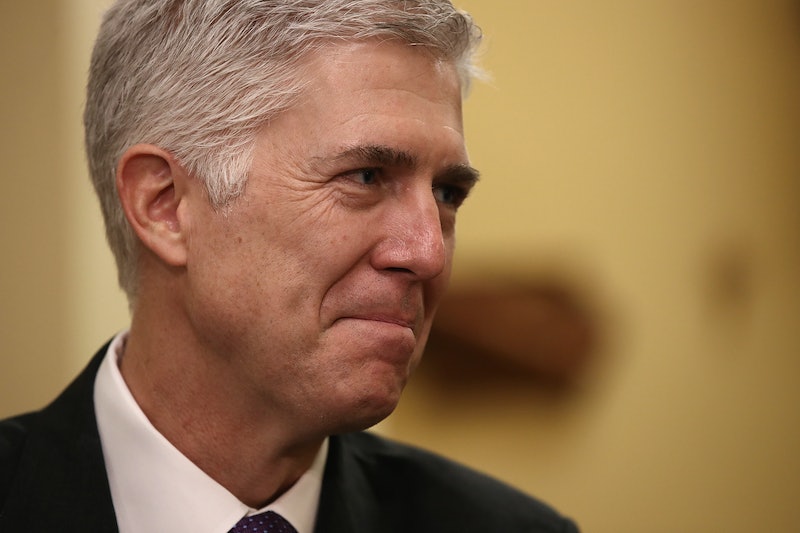 There's a problem with the Supreme Court, and it's not just that there's been an empty seat for about a year now. As usual, John Oliver found the perfect way to represent the atypical vacancy — and he used the show's beloved Supreme Court of dogs to highlight it. On Sunday night's episode, Oliver explained why a lobster on the Last Week Tonight Supreme Court made so much sense.

Now, you need to know some background information to understand why the lobster works so well. In a segment commenting on how cameras aren't allowed in the Supreme Court, Oliver decided to create some of his own footage. The tradition began (relatively) way back in 2014.

When President Obama nominated Merrick Garland for the Supreme Court seat vacated by Antonin Scalia, Senate Republicans refused to even bring the nomination up for a vote. Obama's choice of Garland, then, left Oliver with a choice of his own. With no justices on hand, he used dogs. And when Garland was nominated, an audience vote picked Molly the Schnauzer as his Last Week Tonight Supreme Court stand-in.

Molly, however, never got to serve — much like Garland himself. Instead, Trump nominated the "aggressively caucasian" Neil Gorsuch, as Oliver put it. And now, Gorsuch too needs a stand-in on Oliver's court.

As Oliver said, "Republicans basically stole this seat" by not holding a hearing for Merrick Garland — and so now, Democrats are left with two unappealing options. They can either filibuster Gorsuch's nomination, or confirm a nominee, Oliver says, whose "place on the Supreme Court will always have an asterisk by it."

Where does that leave Oliver's version of the court? Not with another dog, that's for sure. Gorsuch, if confirmed, will be an anomaly on the court — so there needs to be an anomaly to represent him on the dog court. And what could possibly look stranger on a court full of dogs than — you guessed it — a lobster?

You now have your choice of three lobsters who could stand in for Gorsuch on the Last Week Tonight Supreme Court: Cindy Clawford, Pinchers von Shellington III, or Mike. You can vote for your favorite lobster on Twitter, but you've absolutely got to watch the segment to see three lobsters.

Oh, and Oliver points out one more key thing, if you're still not convinced that a lobster is the perfect stand-in for Gorsuch. Becoming a Supreme Court justice is a lifetime appointment, and Gorsuch is a particularly young choice. Oliver's crustacean of choice isn't just a delicacy — if they avoid capture, they can live up to 100 years.