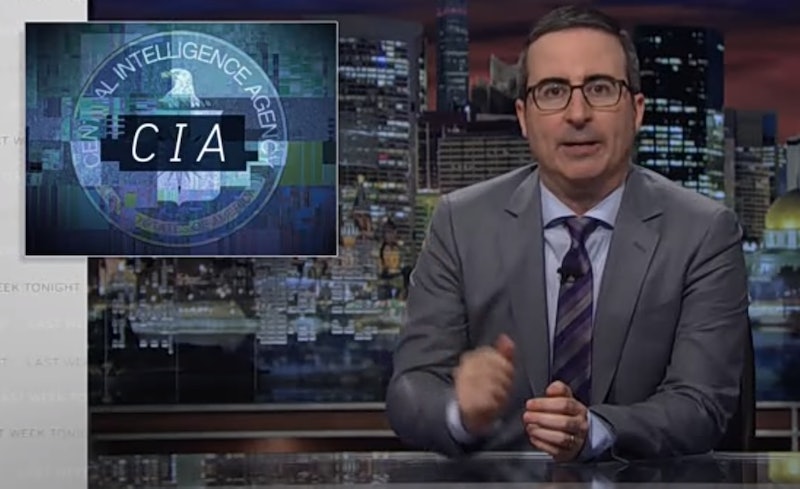 If you've been wary of your electronic devices for the past week after reading about the alleged CIA hacking techniques, John Oliver seems to think you can relax. On Sunday's episode of Last Week Tonight, he explored some of the revelations in the Wikileaks document dump and the media coverage that has been somewhat sensationalistic. "The CIA had a difficult week," Oliver said, putting it more simply than many news organizations. He showed clips from CNN calling the leaks a "bombshell," for example. Oliver says the CIA hacking allegations are overblown, but also sweetly ironic.

As for the irony, I think that is pretty self explanatory. The nation's main spying agency has been spied on and it's alleged secrets have been exposed. Here's how Oliver put it:

Well, well, well. The spy agency has become the spider pawn. And you have to admit there is a certain satisfaction in seeing that. It's akin to going and sh*tting on the neighborhood dog's lawn. "How do you f*cking like it? How do you like it now?"

As for whether it's being reported on fairly, that's a bit more complex. Oliver rolled some CNN footage of a story on the possible hacking of automobiles. "It actually sounded pretty alarming," Oliver pointed out. Following the info dump, a CIA spokesman told The New York Times, "We do not comment on the authenticity or content of purported intelligence documents."

The voiceover explains, "According to Wikileaks, the CIA explored the possibility of hacking into the software of modern cars." Then inside a car, an expert explains, "It can be accessed from outside and perhaps taken control of. This can let you do a whole lot of things from playing the music to taking control of the car entirely and crashing it if you want to assassinate someone."

Oliver puts on a shocked face. "Well, that escalated quickly," he says. "First I'll make them listen to Cold Play and then it's murder." But that's not Oliver's main point. He plays back the voiceover. "According to Wikileaks, the CIA explored the possibility of hacking into the software of modern cars," it says. "That's right," Oliver clears up. "They explored the possibility of it."

That's where Oliver points out that the current news reports have been a bit overblown, adding that this is not a new idea that cars can be hacked remotely. "It's not surprising really to hear that the CIA might be interested in doing that too," Oliver says. Plus, he goes on to say that exploring the possibility of doing something is far from actually doing it, explaining plenty of things he hasn't done but has thought of doing:

A partial list of things I've thought about doing but have not done includes: karate, chess, guitar, becoming a wine guy, CrossFit, going vegan, learning Spanish, Alpaca farming, volunteer firefighting, and being a guy with a woodchopper who spends a year making, like, the perfect birdhouse.

In essence, Oliver explains, "The allegations were less alarming than early coverage suggested." Even the claims about the "Weeping Angel" program that targeted Samsung smart TVs was overblown. The CIA could only allegedly hack them by using a USB device, and the supposed hack could be removed by unplugging.

"What is most important to keep in mind with these revelations is that the CIA with some narrow exceptions is barred from spying domestically, and unlike the Snowden leaks, there is nothing in these documents so far showing illegal surveillance of Americans," Oliver explains.

So there's really not too much to see here — except maybe for some funny CIA code names. Enjoy those "crunchy lime skies" and tune into Last Week Tonight to see the rest.