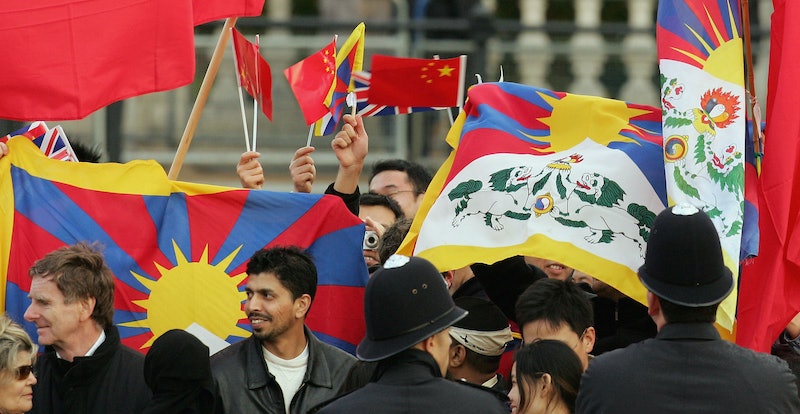 On Sunday's episode of Last Week Tonight, John Oliver explained why Tibet and China have such a rocky relationship, providing audiences with a very helpful overview of a historically contentious issue.

For those who may not know, Tibet is a relatively large autonomous region in southwest China with a population mainly comprised of Tibetan buddhists. However, while somewhat autonomous, China still exercises significant control over Tibet and its affairs, and has used this control to engage in egregious behavior towards the people of Tibet. As Oliver indicated, "China invaded Tibet in 1950 and ever since they've imposed strict controls on the institutions of Tibetan Buddhism there. Temples and monasteries have been destroyed and hundreds of thousands of Tibetans have been killed."

Unfortunately, as Oliver revealed in his segment, the relationship between China and Tibet is still incredibly fractured today. In fact, in a recent report, Freedom House ranked Tibet 2nd worst (behind Syria) for political rights and civil liberties. To put this in perspective, Oliver indicated that both North Korea and Somalia, two countries that are unfortunately well-known for their suppression of human rights, scored better than Tibet in terms of civil and political rights.

Oliver went on to reveal that many Tibetans have found the situation with China so intolerable that some have taking to self-immolation—or setting oneself on fire—as a means of protesting the Chinese government. Sadly, Oliver indicated that since 2009, 146 Tibetans have self-immolated.

Oliver also revealed that self-immolating Tibetans or their families are sometimes punished by Chinese police, who in at least one scenario allegedly wanted to make an immolator's family pay for new police uniforms, since their old uniforms were burned as police beat the protester while he was on fire.

Despite significant tensions with Tibet, Oliver indicated that China is highly reluctant to lose any control over the autonomous region due to its rich resources, which, according to Oliver, include gold and lithium, as well as rivers that supply water and power and a population of over a billion people.

Thus, Oliver noted that because China remains steadfast in its desire to control Tibet, the country is "very sensitive to any perceived threat to its control." Bringing the conversation full circle back to the subject of his impending interview, Oliver asserted that the Dalai Lama epitomizes a threat to Chinese control of the region; this is why the Chinese government seemingly strongly dislikes the religious leader and, indeed, why the Dalai Lama remains in exile.

Oliver's subsequent interview with the Dalai Lama went on to reveal that tensions between Tibet and China may further escalate after the eventual death of the (presently 81-year-old) Dalai Lama, when Chinese and Tibetan leaders could possibly name two "rival Dalai Lamas." According to Oliver, if this happens, "the already fraught situation [between China and Tibet] could spiral out of control."

Overall, Oliver's segment on China-Tibet relations prior to his interview with the Dalai Lama served to help contextualize the interview as well as provide the audience with an important reminder of the troubling situation in Tibet. With his segment, Oliver demonstrated that it is imperative to continue to be attune to world affairs and the plight of human beings everywhere, especially during a Trump presidency which tends to overly attract everyone's attention.