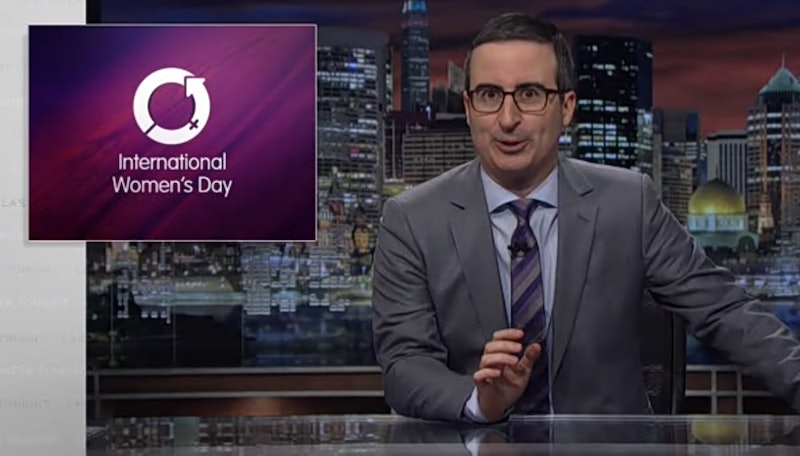 The International Women's Day was a huge success in the United States, generally, and in many corners of the world. But not every world leader got the message. John Oliver covered the International Women's Day reactions from around the world — and they're pretty bad. They even make Trump's tweets about the day sound good, if not believable. "I have tremendous respect for women and the many roles they serve that are vital to the fabric of our society and our economy," Trump sent out last Wednesday. And the rest? Well prepare yourself, because it isn't pretty.

Oliver started of Last Week Tonight on Sunday by introducing the day. "On Wednesday, it was International Women's Day — or as I call it, IntHERnational Women's Day. #Feminism #HashtagFeminism," Oliver quips, before getting to his main analysis. "Every year, the best way of gauging not just how far women have come, but perhaps how far they still have to go is by watching powerful men around the world trip over their d*cks, talking about the day."

Case in point: Vladimir Putin. He had a special taped speech to commemorate the day:

Women give us life and perpetuate it in our children. We will do our utmost to surround our dear women with care and attention, so that they can smile more often.

Oliver wasn't convinced. "Perfect. If there are two things women love, it's being told to smile more and being surrounded," Oliver points out. "Come on baby, you're such pretty gender when you smiled. Give Vladimir a little twirl."

But that wasn't the worst. Oliver then played video of Brazil's president (who took over the job from the country's first woman, Dilma Rousseff, last year following impeachment). "Today, women participate strongly in the economy too. Nobody is more capable of pointing out changes in supermarket prices better than women," President Michel Temer said in a speech.

"OK, OK. He just reduced the economic contribution of half of Brazil's population to, 'Women be shoppin', yo,'" Oliver says. "This year, though, I would argue there was no more spectacular celebration of International Women's Day than in San Antonio, Texas." He had some clips from a local morning show to prove his point. The male host really gave it his all.

"Today is International Women's Day, so ladies, hey, don't worry. It's your day, you can do whatever you want," the host of Daytime @Nine says. "And speaking of doing whatever you want, it's workout Wednesday. It's time to get that bikini body just in time for summer."

Oliver's not a huge fan of this either. "That's right, ladies, you can do whatever you want: crunches, curls, maybe even some light cardio. The point is keep it tight," he mocks. "It's your day but keep it tight." Normally he would have woman co-host, but she was stuck in traffic.

And thus Oliver summarizes the guy's problem. "He attempted to ad-lib his way through a whole story on International Women's Day in a manner so incompetent it really made you feel that the stuck-in-traffic Kimberly probably does most of the heavy lifting on that show." Which proves the point of A Day Without a Women if you think about it, Oliver argues. "I know what happens when you're not there."

Hopefully the reactions are better next year, but it might take a bit of effort.