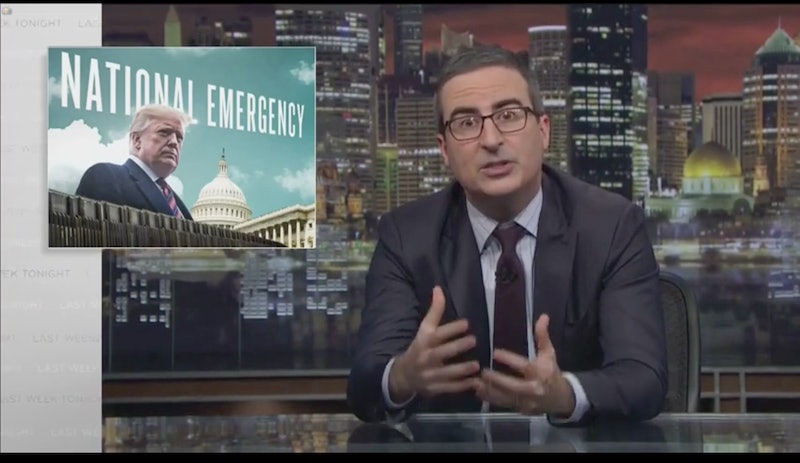 Last Week Tonight returned to the airwaves on Sunday evening, kicking off its much-anticipated sixth season. Perhaps unsurprisingly, the show's host wasted no time diving in to recent political news. Notably, at the beginning of the show, John Oliver mocked Trump's border wall national emergency — and he was pretty ruthless about it. The host repeatedly stressed that there's no actual crisis at the southern border, something which he believes Trump's actions help illustrate.

During his opening segment, the late night host offered a quick recap of how and why Trump's national emergency declaration came to fruition on Feb. 15. As Oliver put it:

The major drama since we left has been President Trump’s repeated attempts to get Congress to fund his border wall — including shutting the government down for nearly a month ... [Now], according to Trump, the border suddenly constitutes a ‘national emergency' … and to be clear, there is zero actual emergency at the border right now.

The late night host further emphasized that there's not a crisis at the border because " ... Illegal crossings have been declining for twenty years, and a wall would be expensive and completely ineffective.”

Oliver then stressed that, because a national emergency declaration constitutes a serious step that expands a "president’s power during a legitimate crisis," it was important that Trump really make his case to illustrate that building a border wall requires an emergency declaration. However, Oliver suggested that the president ended up doing the opposite.

To illustrate his point, the comedian played a clip of Trump announcing his emergency declaration. In the clip, the president asserted, “I could do the wall over a longer period of time. I didn’t need to do this. But I’d rather do it much faster.” Oliver appeared flabbergasted in response, saying, “Well it’s not an emergency then, is it!”

Oliver also noted that, shortly after Trump made his emergency declaration, he traveled to Florida for a weekend trip. The late night host revealed that, while in Florida, Trump was apparently "photographed waiting at an omelette bar." Oliver pointed out that heading to a breakfast buffet isn't a typical action in an emergency situation. He joked, "You know, [waiting at an omelette bar] is the kind of thing you do when America is in crisis.”

The late night host wrapped up his segment on Trump's border wall national emergency by noting that there have already been legal challenges to Trump's declaration, something which the president seemingly expected. The host then shared a clip in which Trump asserted:

After playing the president's remarks, Oliver joked, "You know, yet another great reason for Trump to not be president is that I now kind of want to see him as a historical expert on the next Ken Burns miniseries." The host then mimicked Trump's tone and cadence while pretending to narrate The Great War miniseries.

Oliver certainly didn't hold back in his criticism of Trump's national emergency declaration. And it's probably not the last audiences have heard about the issue. Indeed, Oliver promised that "there will be plenty more to say about Trump's border wall going forward."